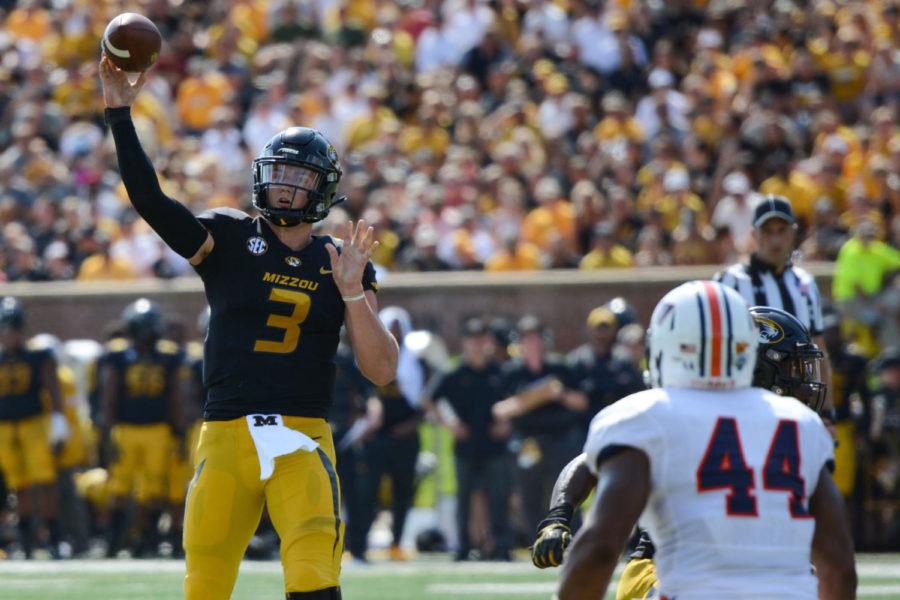 Images of the Missouri football team on September 1, 2018 at the Farout Field at Memorial Stadium in Columbia, Missouri. Photo by Adam Cole | The Maneater

Kentucky’s defense will face one of its toughest challenges of the season when the Cats head to Columbia to take on Drew Lock and the rest of the Missouri Tigers.

The 6-1 Wildcats, who are off to their best seven-game start of a season since 2007, are currently ranked second in the nation in scoring defense, allowing only 12.9 points per game. The defense has allowed fewer than 20 points to each of its opponents this season, the first time since 1955 Kentucky has done that in its first seven games.

Josh Allen anchors the defense. His 12.5 tackles for loss to start the season are the best in the conference and his eight sacks are good enough for seventh nationally. Allen has been disrupting opposing offensive lines all season, causing loads of false starts.

“I’ve been around some dominant edge rushers,” head coach Mark Stoops said. “But I haven’t seen somebody create so many [false starts].”

Missouri’s offense will be a big test for the Cats. Lock is one of the best quarterbacks in college football; some even have him going as the top pick in next year’s NFL draft.

The Tigers are averaging just over 500 yards per game and 38.6 points per game— and that number goes up to 46.3 points per game when the Tigers play at home. They’re coming off of a 65-33 victory at home over Memphis.

Lock is the key to their offense, averaging 282.7 yards passing a game. The pass-heavy offense has had lots of help from their offensive line, allowing only eight sacks on the season.

“He sees the field, gets rid of the ball so quick and has such a strong arm,” Stoops said about Lock. “He’s a very good football player.”

A win for the Cats would give them their best start to a season in 41 years, which is coincidentally the number Allen wears.

According to ESPN’s Football Power Index, Kentucky has a 35.5 percent chance of winning the matchup.

The game will be played at 4 p.m. on Saturday at Faurot Field in Columbia, Missouri.