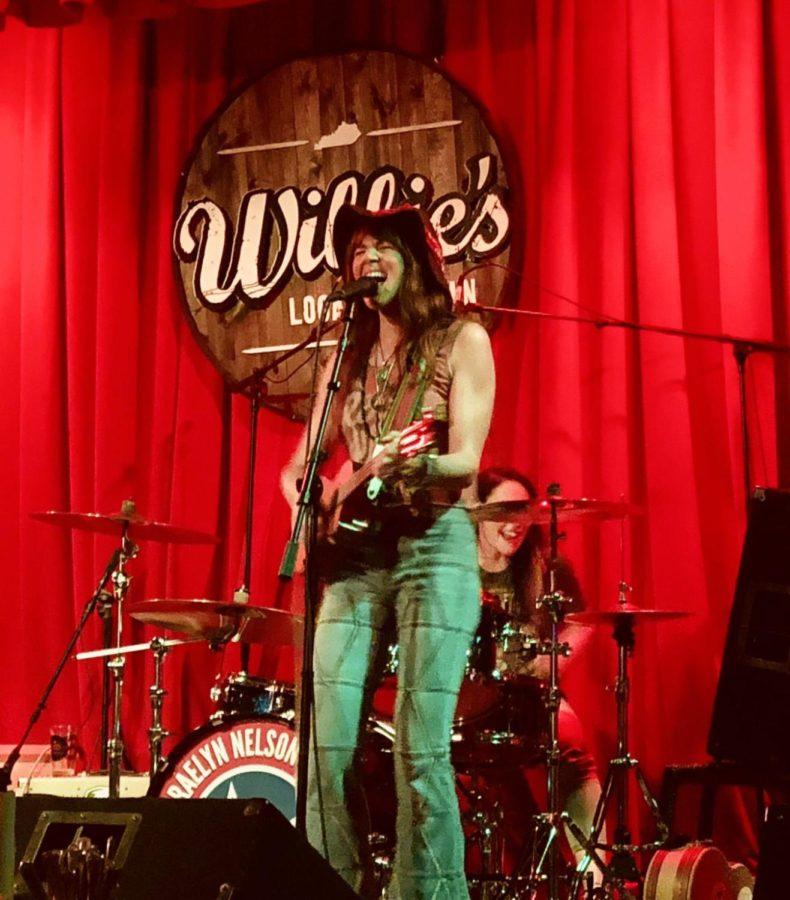 That was how Raelyn Nelson introduced her band’s set at Willie’s Locally Known in Lexington.

The casual atmosphere of the restaurant combined with the collective spirit of the crowd is what made Raelyn Nelson Band’s free concert so unique and special to the band, the audience and the workers alike.

Opening with a cover of “Bad Reputation” by Joan Jett, Raelyn Nelson Band was able to quickly obtain the attention and approval of the customers at Willie’s that night. Infusing country elements in a heavy rock n’ roll sound, the music that the band performed was memorable and fresh for the audience to hear. With a mix of covers of classic rock and original songs, each new set piece was different from the last.

“I would describe our sound as Loretta Lynn with The Ramones backing her,” said Raelyn Nelson, lead vocalist and ukulele player. “Not quite rock, but not quite country either. We’re our own unique pocket in the middle.”

Nelson, along with bassist Preach, drummer Angela, and guitarist John “JB,” formed the band in Nashville. The band originated from a desire for Nelson to find a studio to record music. Her search for studios to record in led her to her bandmates. They play small gigs at least every other weekend, and they travel from city to city spreading their sound and selling their original merchandise.

The crowd was heavily engaged throughout the set. From foot-tapping to head-bobbing to mouthing the lyrics they knew, attendees and servers alike were invested in the total experience that Raelyn Nelson band was presenting.

Bradley Steviss, an attendee, was delightfully surprised by the unique sound that the band embodied.

“I didn’t really know what to expect as the night went on,” Steviss said. “I was expecting more classic girl rock after Joan Jett, but [the band] kept surprising me. I really enjoyed all of the variety in their set.”

As the evening went on and the restaurant was about to close, the size of the crowd diminished, but the energy did not. Each song flowed seamlessly into each other. Sometimes Nelson would introduce a new song by name, and other times she would just signal to her band and go straight into a new song. The other band members would also sometimes introduce songs, or banter with their fellow bandmates.

Additionally, the band was really focused on keeping the audience interactive. They had conversations with attendees and would consistently ask how everyone was enjoying their nights, their drinks and the music. The crowd slowly moved from being spread around the restaurant to all sitting directly in front of the stage.

The band closed out their set with an energetic “Ballroom Blitz” by Sweet. The band got a standing ovation from the remaining crowd at Willie’s.

Raelyn Nelson Band will be in Pittsburgh on Oct. 5, 2018, and then will go to perform at a charity music festival in West Virginia on the Oct. 6, 2018.