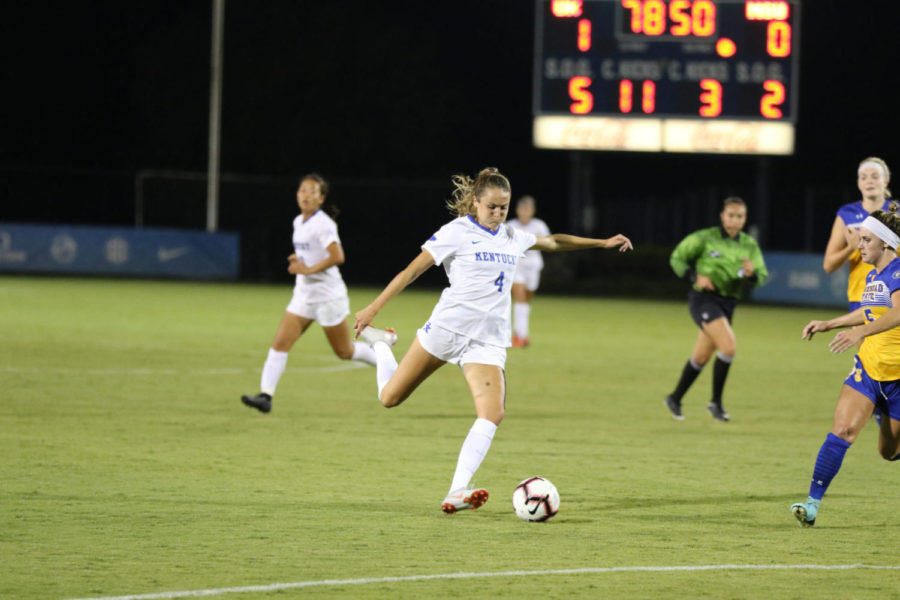 Sophomore midfielder Hollie Olding lines up a kick during the game against Morehead State on August 23rd, 2018. Photo by Michael Clubb | Staff

After being off for a week, the UK women’s soccer team was back in the Bell Soccer Complex on Thursday night to host the Ole Miss Rebels. UK was looking to snap its eight-game losing streak and earn its first SEC win of the season, but Ole Miss defeated the Cats 2-0, extending their losing streak to nine.

Just two minutes into the game the Rebels scored after a defensive breakdown from the Cats. The goal came from sophomore forward Channing Foster, her seventh goal of the season off an assist from the start senior, CeCe Kizer.

The Cats had offensive possession of the ball for the majority of the first half—but failed to convert and score. During the opportunities that they did have to score, a player was offside.

1-0 would remain the score going into halftime. This was UK’s 15th consecutive game allowing the opposing team to score the first goal.

In the 53rd minute, Foster found the back of the net again after another moment of weakness by the UK defense, off an assist from freshman midfielder Maddy Houghton.

The rest of the second half was fairly quiet from teams. Defense continued to hang tough on both sides, resulting in the final score of 2-0.

With this Ole Miss win, it extends their hopes for earning a spot in the SEC Tournament in Orange Beach, Florida.

Even though this season has not gone like any one UK player had planned, freshman defender Gretchen Mills said that the team is going through some “growing pains,” and they still look on the bright side even after tough losses.

“We just keep going game after game—we look at the positives and we look at how we can improve each game,” Mills said.

As for head coach Ian Carry, Mills said he is remaining positive as well even though times have been tough for this team this season.

Next up for the Cats is a road match against Vanderbilt on Sunday afternoon. Game time is set for 2 p.m.