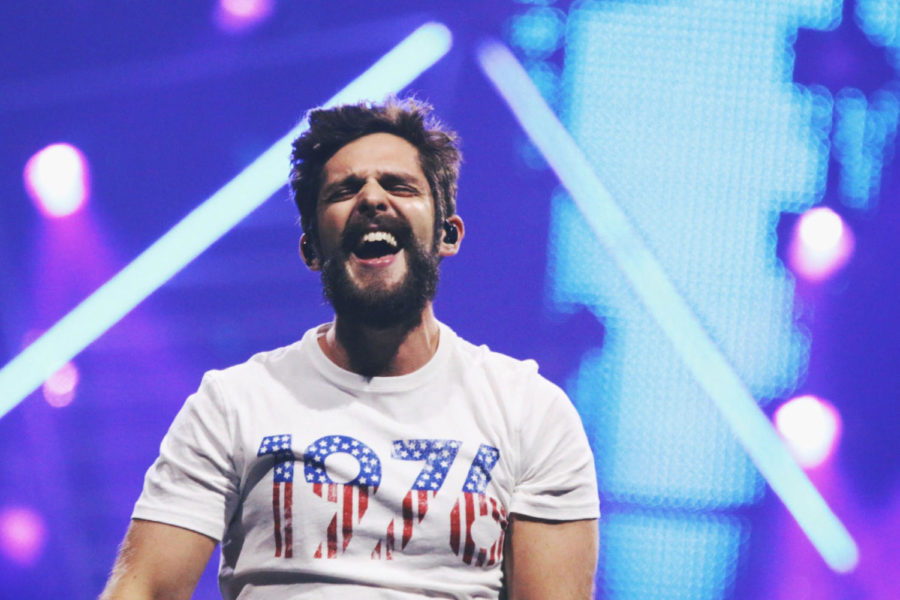 “This building is on my bucket list to play in,” Thomas Rhett said in Rupp Arena on Thursday night.

By 7 p.m., Rupp Arena was packed around the runway-shaped stage with a crowd awaiting some country music by the one and only Thomas Rhett.

The “Life Changes” album is where Rhett stepped out of his comfort zone and tested his musical abilities by dropping with a versatile sound. The album received overwhelming positive feedback. The album debuted #1 on the all genre Billboard 200 chart, marking the first country release to take the top spot.

To warm up the crowd, popular country star Brett Young sang some familiar songs and prepared them for the main event. As a rising country star, Young wanted to thank his fans in the audience.

Ending his set on a high note with a hit song, Young got the crowd engaged just in time for Rhett to hit the stage. As the backdrop fell to the floor and the country singer and band were revealed, the crowd roared after waiting for him all night. Red lights scanned the crowd and smoke boomed from the stage as Rhett continued to run up and down the stage in his Converse and ripped jeans, engaging all his fans by taking pictures, signing autographs and high fiving.

A couple songs into his set, Rhett stopped, held up five fingers and asked if this meant anything to anyone. The crowd knew exactly what that meant: UK football was 5-0.

In response to that, the crowd did the iconic C-A-T-S chant, which Rhett seemed to love.

“OK now that I know you can yell; can I hear you sing?” Rhett said.

The crowd continued to sing and know all the words to the following songs. Mid-set, it was time to slow it down, and Rhett took a seat at the end of the runway with a guitar in his hand and pianists by his side and proposed a toast to the crowd.

The atmosphere of these songs slowed down, and so did the concert production as well, with just a spotlight on Rhett at center stage, but then Rupp Arena lit up with cell phone lights moving side to side, setting the serene mood based on the music. Toward the end of the show, Rhett noticed a girl in the front row who was celebrating her 21st birthday.

“I really only hoped Thomas Rhett would take a selfie with me. I could have never imagined that he would have serenaded me a personalized version of Happy Birthday in front of the whole crowd! I’m still in shock!” said Shelby Wright, a UK junior.

Wright’s 21st was anything but forgettable and apparently so was Lexington to Rhett.

“Thank you so freaking much; you’re the best crowd I’ve played for,” Rhett said.

Rhett ended the concert with two very popular songs, one being his very famous “Die a Happy Man.”

His last words to the crowd were, “Lexington, Kentucky, God bless you guys. I’m Thomas Rhett.”