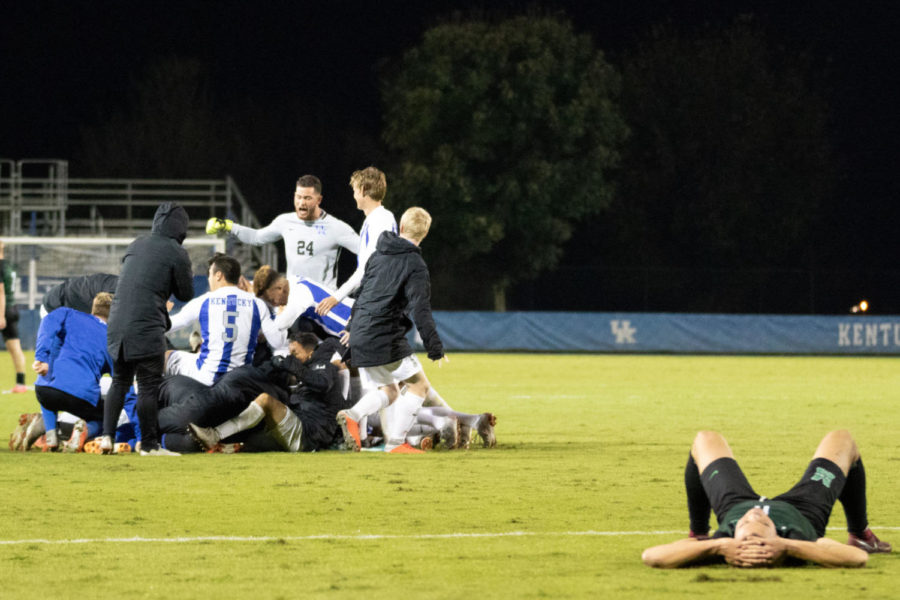 UK celebrates as a MU player lies down in defeat on the field. No. 5 University of Kentucky men's soccer team defeated Marshall University 1-0 in double overtime on Saturday, October 13th, 2018 in Lexington, Kentucky

After its first loss of the season to Florida International University, the No. 8 ranked Kentucky Wildcats bounced back to add another win to their column. Saturday, the Wildcats defeated Marshall 1-0 in front of a rowdy crowd at The Bell. This will add to their all-time series against Marshall 20-9-3.

After many shots, the first half remained scoreless by each team. Kentucky had seven shots on goal while Marshall had four.

In the second half, Jason Reyes had a shot on goal, and after being reviewed, it was decided the goal was saved by Marshall’s goalie, Paulo Pita.

As frustrations grew stronger, fouls increased on both teams. Kentucky received ten while Marshall received six. Both Kentucky’s Aimé Mabika and Marshall’s Pita were issued yellow cards after a box altercation. Another yellow card was issued to Pedro Dolabella in the 80th minute.

Kentucky’s Daniel Evans had a shot in the 89th minute in desperation to try to win the game for his team, but was saved by Pita.

After an intense regulation battle, the game extended into overtime.

During the first overtime period, Kentucky’s Kalil Elmedkhar dribbled the ball in attempt to score in the last minute of the period but was saved again.

Finally, during the second overtime period in the 104th minute, JJ Williams struck the ball from the left into the back of the right side of the goal to win the game.

This game winning goal is the tenth goal Williams has scored this season.

“[There is] no better way to get number ten than overtime for my team,” Williams said.

The Wildcats were able to redeem themselves with a win and Kentucky’s head coach, Johan Cedergren was “really happy to get a win, nice after last weekend.”

Kentucky totaled 28 shots in the goal. Williams and Daniel Evans both tie for most shots on goal (six) individually. Cedergren explained that “it was a little tighter than we wanted” and they hope to score earlier in the next matchup.

“It was nice to get back to winning ways and are just gonna get ready for a very tough game up in Columbus on Tuesday” said Kentucky’s coach.

The Kentucky Wildcats will travel to Columbus, Ohio in hopes to extend their wins. They will match up against the Ohio State University on Tuesday, October 16th at 7pm at the Jesse Owens Memorial Stadium.

“Nothing comes easy. That just goes to show,” Williams said.