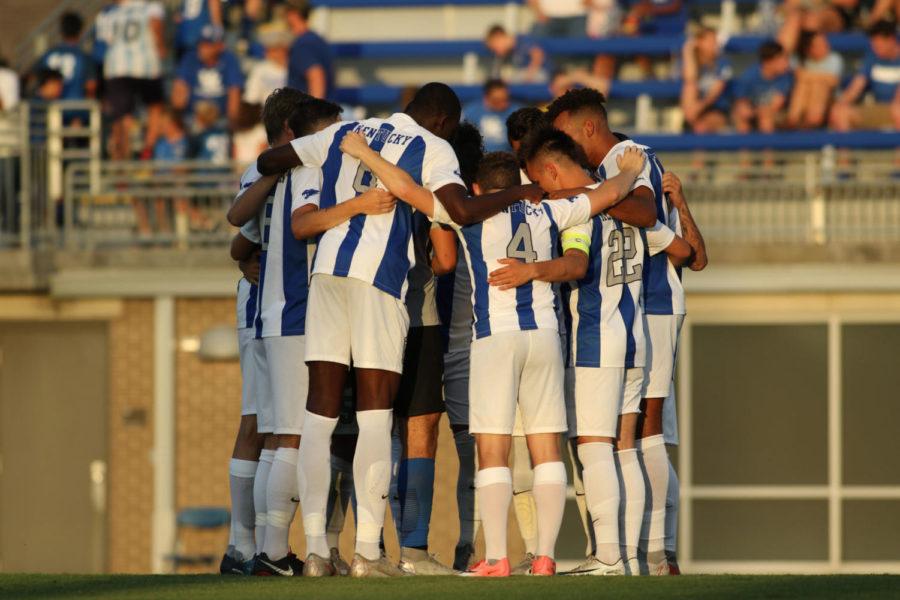 UK players huddling before kickoff. University of Kentucky men's soccer team beat University of Louisville for their 3rd straight win of the season on Tuesday, September 4th, 2018 in Lexington, Kentucky. Photo by Michael Clubb I Staff

The No. 5/7 ranked UK men’s soccer team’s 8-0-1 start is the program’s best-ever start. The Cats’ offense ranks in the top three in scoring average, points and goals in the C-USA. UK goalkeeper Enrique Facusse boasts the best goals against average (GAA) in the C-USA with a 0.33 GAA.

Amidst all the success the team is enjoying, it will have to prove itself in perhaps what will be one of its biggests game this season: playing against the second-ranked Indiana Hoosiers tomorrow night at The Bell.

Indiana defeated UK, 2-0, in Bloomington, Indiana last season. The Hoosiers were ranked No. 1 at that time. UK is currently 1-25-3 against Indiana all-time. Although the Cats have struggled against the Hoosiers, UK head coach Johan Cedergren said tomorrow’s matchup gives his Cats a chance to show others who they are.

“To play Indiana tomorrow at home provides us a chance to prove how good we really are,” Cedergren said during a post-practice press conference Tuesday afternoon.

Cats’ forward and team captain J.J Williams also spoke Tuesday and said that the matchup will be beneficial for the team looking ahead at the postseason.

The Cats exited last year’s C-USA tournament early following a 1-0 loss to the Marshall Thundering Herd. They didn’t qualify for the NCAA tournament but did qualify in 2016.

According to Cedergren, he said that he believes his current team possesses some of the best players in the nation.

“I do think that some of our players are the best players at their positions in college soccer,” Cedergen said. “I think the Louisville game was proof of that.”

Williams also mentioned that he’s seen several young players grow over the course of the season.

Williams’ co-team captain, Tanner Hummel, said that a matchup this big should still be seen like any other game.

“We need to treat this like another big home game. We need to stick to our core values and be humbled and disciplined and play for each other,” Hummel said.

The game is set for tomorrow at 7 p.m. at The Bell. The game can be seen on SEC Network Plus.