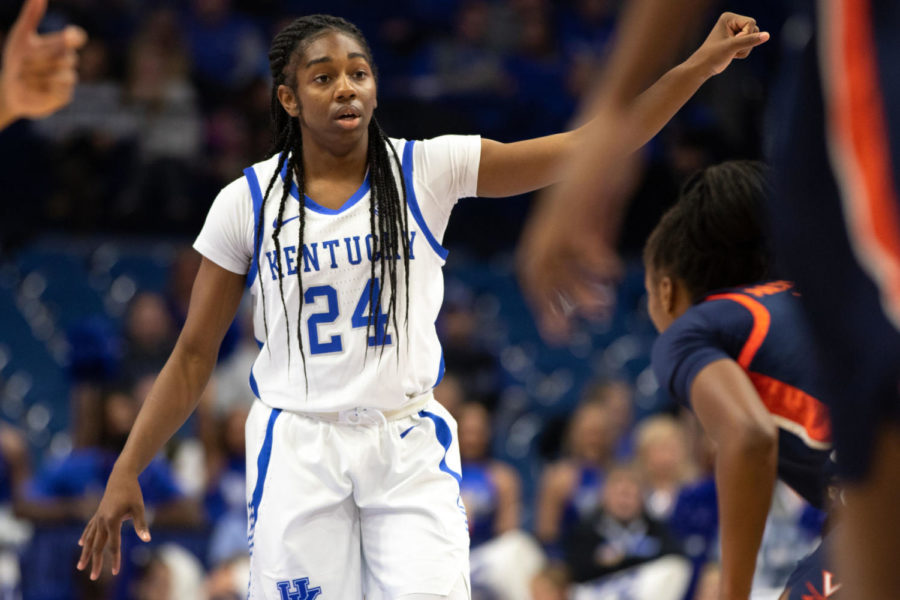 Kentucky defeated Virginia in Rupp Arena 63-51 Thursday night. This was a historic game for one Wildcat, as senior guard Taylor Murray scored her 1,000th career point. Murray’s milestone point came on a free throw with six seconds left in the game. Murray is now the 34th member in the program to join the club.

Asked about her big moment, Murray said, “It feels really good. I just wanna thank my teammates for just pushing me each and every day and I wouldn’t have made my 1,000th point if it wasn’t for them.”

Murray was quiet for most of the game, choosing instead to pass the ball and run the offense for UK. She didn’t take a shot in the first quarter, but she made herself known on the defensive end.

Late in the third quarter, Murray went for a layup and went down hard on a physical no-call play. She showed she was in pain but willed herself up and got back on defense. Any pain she was in was shaken off completely by the end of the third period.

This was Kentucky’s closest game of the young season. Virginia’s center was 6’9 Felicia Aiyeotan. She’s six inches taller than UK’s biggest player. If Aiyeotan plays in the WNBA, she would be the second tallest player in league history.

The Wildcats got off to a slow start, allowing UVA to score the first four points, all by Aiyeotan. A step-back jumper by senior guard Maci Morris gave the Cats an early bucket and more energy.

As always, the UK defense was a key factor in tonight’s win. Kentucky forced 32 turnovers. UVA played No. 6 Mississippi State in its first game of the year and turned the ball over 23 times. Both Morris and freshman Blair Green had a game-high three steals. Green also recorded two blocks.

Green finished with nine points and several highlight plays. A little over halfway through the third quarter, Green checked in and immediately hit a three for the Wildcats, keeping the team energy up.