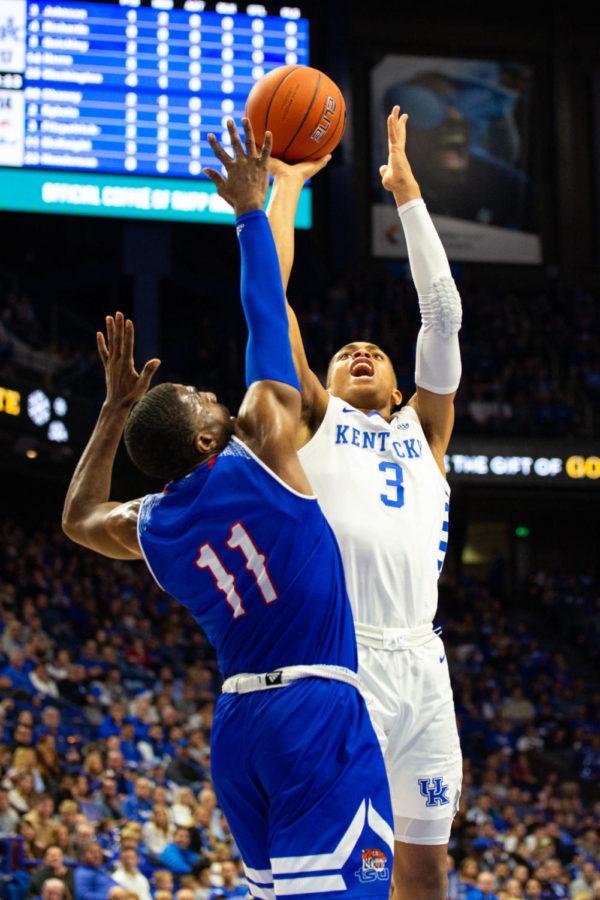 Kentucky freshman guard Keldon Johnson shoots over a defender during the game against Tennessee State on Friday, Nov. 23, 2018, at Rupp Arena in Lexington, Kentucky. Photo by Jordan Prather | Staff

Stuffed full of turkey and potatoes the day after Thanksgiving, the UK men’s basketball team took a while to get their offense started against Tennessee State Friday night. The Cats still came away with the win, 77-62. Forward Keldon Johnson contributed 27 points and seven rebounds, leading the team in scoring.

After going up 4-3, UK didn’t hold another lead in the game until over 10 minutes had passed in the contest. Even at that point, the score was only 15-14 in favor of the Cats.

UK didn’t experience serious separation or offensive success until the half was almost over, managing a double-digit lead despite shooting 1-10 from deep and just over 30 percent from the floor in the first half. Tyler Herro knocked down UK’s first three in transition, after eight unsuccessful attempts.

Free throws kept the Cats afloat and dominant is this game, as they got the Tigers into foul trouble early and kept them there for the entire game. UK shot 20 free throws in the first half,  making 16 of them. They led by seven at the half, so their performance at the charity stripe more than made up the difference.

Fortunately for them, they began to make those shots in the second half. They shot 56 percent in the second half, and 60 percent from deep. With their improved offense, they stretched out their lead to as many as 20 points, with 7:38 left in the game.

After struggling to assert themselves on the glass in the first half, only leading the rebound battle by four, the Cats took some more control in the second period to help support their much-improved shooting efficiency. UK finished with a plus-nine rebound advantage.

Johnson was a big part of the increase in separation, as he went from shooting 1-5 in the first half to surging into traffic and picking up his points at the line (13-18 in free throws). After making a few, he started scoring in the lane and ended up shooting 7-15 in the game. The Cats were able to maintain a double-digit advantage the entire game, despite an 8-0 TSU run late in the second half.