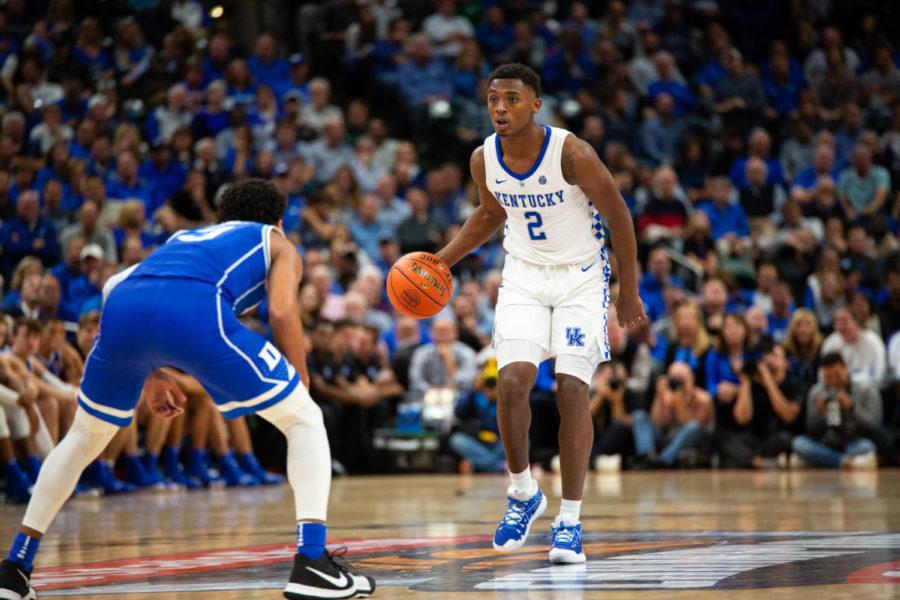 Kentucky freshman guard Ashton Hagans brings the ball up the court during the game against Duke in the State Farm Champions Classic on Tuesday, Nov. 6, 2018, at Bankers Life Fieldhouse in Indianapolis, Indiana. Photo by Jordan Prather | Staff

Two Kentucky basketball players, one former and one current, have been listed on a document relating to the FBI’s investigation into college basketball.

On Wednesday evening, ESPN released an email that aspiring sports agent Christian Dawkins sent to business partners three weeks before being arrested by FBI agents. Former player Jarred Vanderbilt and current point guard for the Cats Ashton Hagans were listed on that email, which outlined plans of specific people to send payments to, and when to send them.

There is no evidence that the payments were ever dispersed, or that the players listed on the email had knowledge about it.

The email was just a piece of the evidence the FBI released to the NCAA, allowing the NCAA to use it for their own investigation, Yahoo! Sports reported on Tuesday night.

Hagans was originally committed to Georgia, a Nike school, before recommitting in late February 2018. Hagans committed to UK one and a half months later and reclassified the past summer to join Kentucky’s current roster.

He was the starting point guard in Kentucky’s season-opener against Duke on Tuesday evening.

The email also said that Dawkins planned to give Vanderbilt’s family $30,000 so that the family could travel to see Vanderbilt play during his lone season at Kentucky. Vanderbilt’s father was also going to receive an additional $25,000 when Vanderbilt turned pro.

Dawkins also proposed that Vanderbilt should receive a $100,000 line of credit and $25,000 advance on his marketing revenue if Vanderbilt was projected as a lottery pick at the end of last season.

Several other players were listed in the email, such as Alabama’s Collin Sexton, Mississippi State’s Lamar Peters, Louisville’s Ray Spalding, and James Wiseman, a high school prospect who Kentucky has been actively recruiting.

Head coach John Calipari is expected to speak to media tomorrow afternoon. No players will be made available for interviews according to UK Athletics.