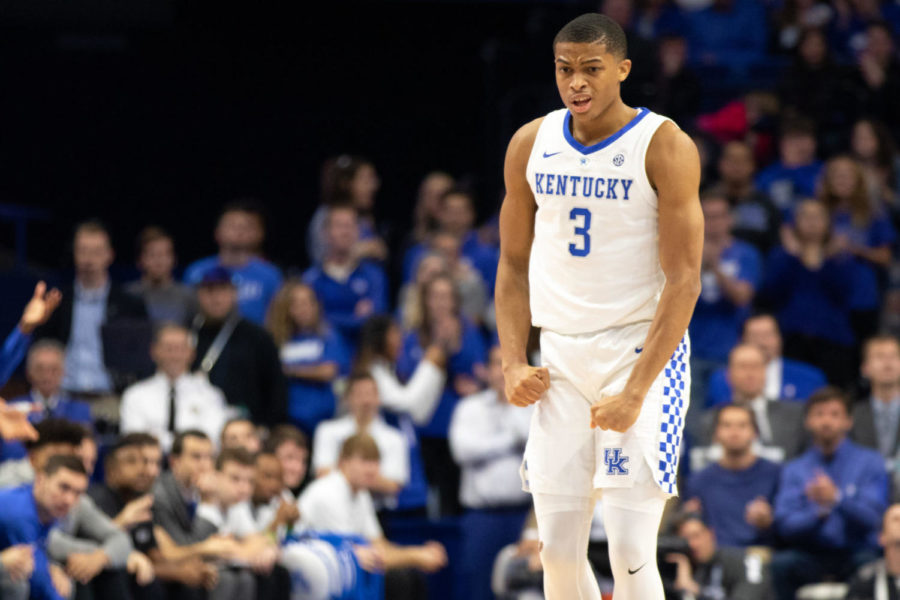 It took every minute, but the UK men’s basketball team opened its home slate with a win as the Cats took down the Southern Illinois Salukis on Friday night. The 71-59 victory came in spite of 19 turnovers, easily a season high. Neither team led by double digits until three minutes were left in the game, and the Cats didn’t even gain a lead until the end of the first half.

The story of the game, above all else, was the play of center Nick Richards. The often-sloppy UK center had double digit rebounds before the end of the first half and finished the game with 19, tied for a UK record in the Calipari era with Michael Kidd-Gilchrist.

The Cats didn’t even get a lead until there were five minutes left in the first half, when a three by guard Quade Green put the Cats up 22-19. Rupp Arena was a fairly quiet place until this point, when the Kentucky bench started hopping and the Cats started feeling inspired.

However explosive some of the Cats were, they also had to weather some very poor showings from their players.

Guard Tyler Herro was ice cold, going 0-6 from the floor with no points, three rebounds and a turnover in 20 minutes. In the second half, Herro posted up an opponent and took a fadeaway jumper without leaning back very much and was substituted out for the rest of the game.

Herro wasn’t the only Cat with a poor performance, however. Point guard Ashton Hagans didn’t take a shot, turned the ball over twice and committed three on-ball reach-in fouls. After his third, he didn’t come back into the game.

Finally, sophomore forward P.J. Washington has yet to break out this season, finishing with three points, six rebounds and five turnovers in a struggle that he played just 20 minutes in.

UK’s struggles weren’t for lack of energy, however. Keldon Johnson and Immanuel Quickley, who both led the Cats with 15 points and four rebounds, were constantly seen hyping up their teammates from both the court and the bench when the Cats began to surge.

It’s the first game in the win column for the Cats, and they’ll look for another one against North Dakota on Wednesday night.