Calipari believes confidence is the root of all problems 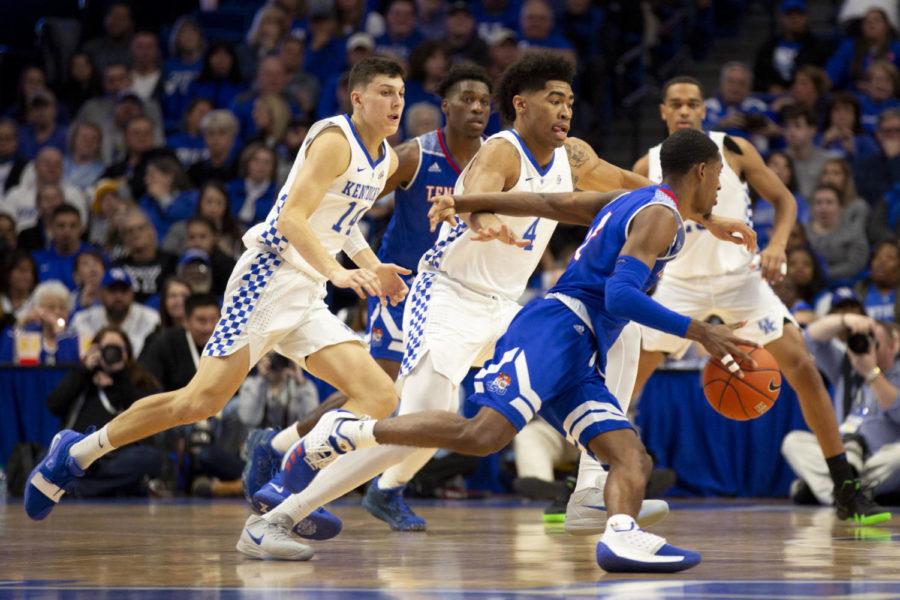 The Kentucky Wildcats went 1-of-10 from beyond the arc in the first half of their 77-62 win over Tennessee State Friday night—but according to head coach John Calipari, offense isn’t the problem.

Kentucky has struggled with defending the three all season so far, but tonight they showed weaknesses in defending line drives to the basket, as well. Coach Cal believes the main issue his players have defensively is that they aren’t confident enough, which translates to the offensive side of the ball. He says once they start showing confidence on defense, the offensive efficiency will follow.

To solve the confidence issue, Cal says his team needs to start working more on straight line-drives, anticipating better and being more proactive rather than reactive on defense.

Freshman Kentucky guard Keldon Johnson, who ended up with 27 points and seven rebounds for the Cats, also admits that they’re not playing the greatest defense.

“He’s (Calipari) pretty annoyed, as he should be. It’s unacceptable. We wanna be like a team we wanna be and we can’t be having defensive lapses like that,” Johnson said.

While Calipari thinks the main issue is confidence, Johnson says it’s holding themselves accountable and realizing it’s “not okay to get beat and give up easy buckets.” As far as the low-confidence levels Calipari was talking about, Johnson says there’s a simple solution.

“Just picking each other up. Just being there for each other when we have defensive lapses and just keep practicing,” Johnson said.

Kentucky graduate student Reid Travis says that his team has been working a lot defensively in practices and that the most frustrating thing about their struggles is that they have been putting the majority of their emphasis on defense, but it hasn’t been translating to the games they’ve played.

“I think we’re all disappointed as far as keeping guys in front of us, moving our feet, blocking shots, there’s just a lot of opportunities that we’re seeing on film and a lot of things that we want to do the right thing,” Travis said. “We’re putting a lot of effort in to do the right things but then we get in the game and all the work that we put in just isn’t showing as much as it should right now.”

Calipari says that for now, all they can do is watch the film, improve in practice and try to build confidence in his players.