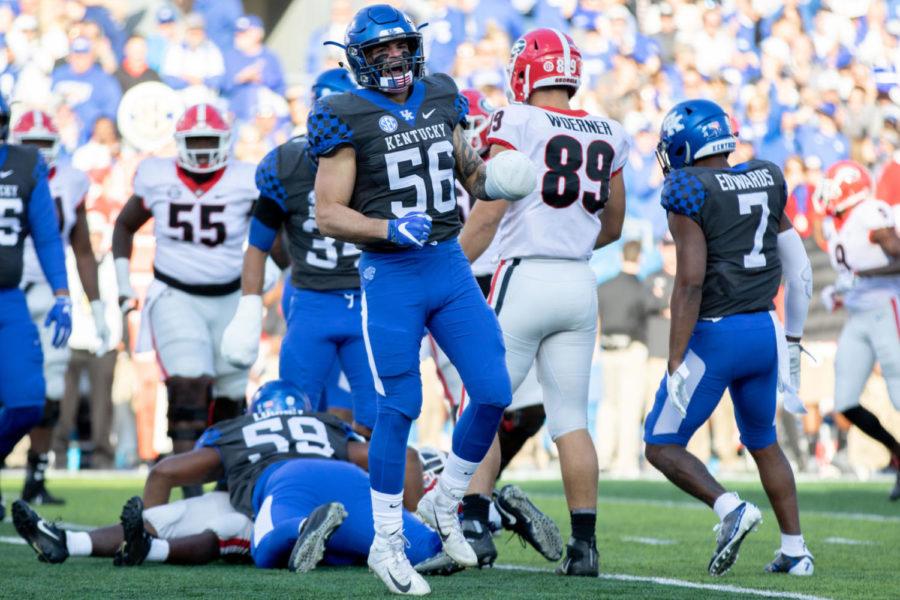 After being defeated by Georgia for a chance to win the SEC East, the UK football team’s defense talked with the media after practice Wednesday about its matchup against Tennessee this weekend.

Kentucky defensive coordinator Matt House has recently been nominated as a Broyles award recipient, an honor given to the nation’s top assistant coach.

House talked about improving from last week and said he knows his team played one of the best teams in college football, but he wants them to get back to playing football like one of the best defenses in the country.

According to NCAA.com, Tennessee allows the fifth most tackles for loss in the FBS. Getting in the backfield and tackling players for a loss is a priority in every game, especially this one.

“When there’s an opportunity, when you call a pressure or when a guy gets a clean run through – it’s finishing the tackle,” House said.

Junior linebacker Kash Daniel is still wearing a club on his hand and has no set date to remove the cast, but he says his hand is feeling better and he hopes to trim it down some. Daniel thinks if the cast is trimmed down, he’ll be able to bend his wrist and make tackling easier.

“Right after this, I’ll have another chapter to open up,” Allen said after practice. “I’m ready to finish this chapter, these next couple of games, to open a new chapter and see where my life goes from there.”

The Cats have a 16-game losing streak in Knoxville. Allen hopes to break another historic streak during his senior season.

“This is a good way to end, especially with a rival like this,” Allen said. “A game we haven’t won in a long time. We’re ready to make history.”

Daniel said he knew what was at stake in the loss to Georgia and he’s accepted the fact UK won’t be playing for the SEC Championship, but he knows his team still has a lot to play for and accomplish.

Kentucky will face Tennessee at 3:30 Saturday in Knoxville.