Wilson-Bowden connection a bright spot in win over Cardinals 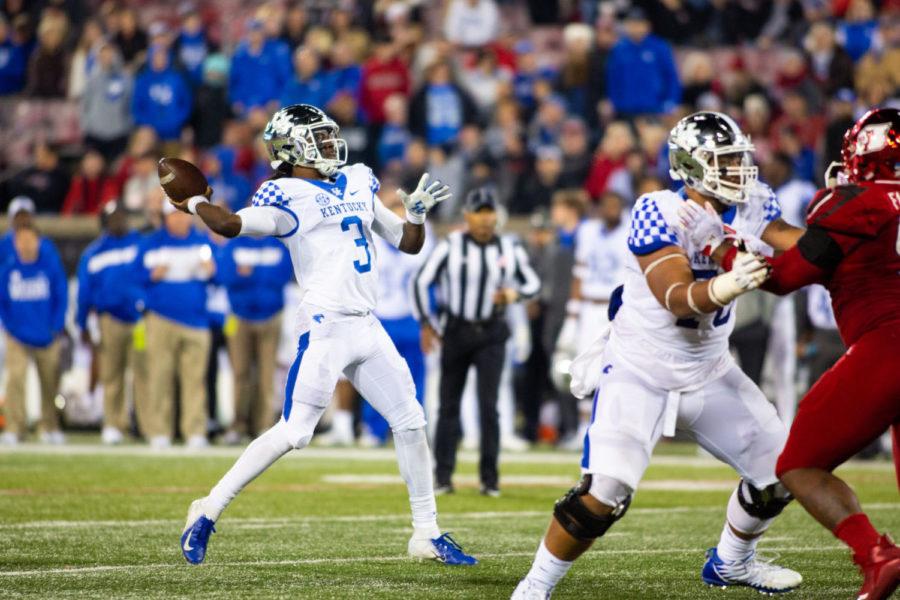 The Terry Wilson-Lynn Bowden connection has shown glimpses all season of what potential it has, but after Kentucky’s 56-10 win over rival Louisville, Big Blue Nation can expect the duo to be a threat next season.

Wilson, UK’s junior college transfer quarterback, went 17-of-23, good for 261 yards and three touchdowns—he also had one rushing touchdown himself. In the first half, Wilson was near-perfect, going 14-of-16 for 208 yards, two touchdowns, had eight rushes for 31 yards and a score. The only thing keeping the quarterback from a perfect passing game in the first half were two drops from his receivers.

The sophomore says the game was the best of his Kentucky career so far.

“I feel comfortable out there and we ran our playbook and were making plays out there, having fun. I feel like we did good.” Wilson said.

As for Bowden, also a sophomore, the wide receiver had six receptions good for 86 yards and two touchdowns. Both of Bowden’s touchdowns were in the second quarter and took the Cats to a 35-10 lead into halftime. The first was a 28-yard deep pass from Wilson that sent Bowden into the end zone.

Bowden’s second touchdown was easier than most touchdown connections—Wilson scrambled a bit out of the pocket before he saw Bowden wide open in the end zone with no defenders in his vicinity.

“That was probably the easiest touchdown pass this season. That’s the one he gets open for us. I did a good job expanding the play, you know, he was wide open,” Wilson said.

Bowden says his fear wasn’t that the ball would get broken up before it got to him, but that he would drop the pass. The receiver says he’s still unsure of how he got that wide open in the end zone.

“I really don’t know. I was just running, I looked and I turned around, and said hey, hopefully he sees me,” Bowden said.

According to Bowden, trust is how the two connected so well against the Cardinals. He says he can’t speak “too much” on it, but fans are getting a preview of what’s next for the duo next season.

“My boy Terry. We got to get back in the lab and do more. I still feel like we need to connect on deeper balls, so that’s something we’re going to have to work on,” Bowden said.

“He’s been steady and getting better. We know he’s great with the ball in his hands, but now he’s getting open and Terry is hitting him,” Stoops said.

Both players had impressive stat lines in the win, but to add to that, Wilson received the Howard Schnellenberger Award as the Most Valuable Player of the winning team in the Governor’s Cup and Bowden’s 61 receptions on the season are the most for a Wildcat since Randall Cobb had 84 in 2010.

“I still feel like we haven’t played our best football yet, so there’s more to come,” Bowden said.