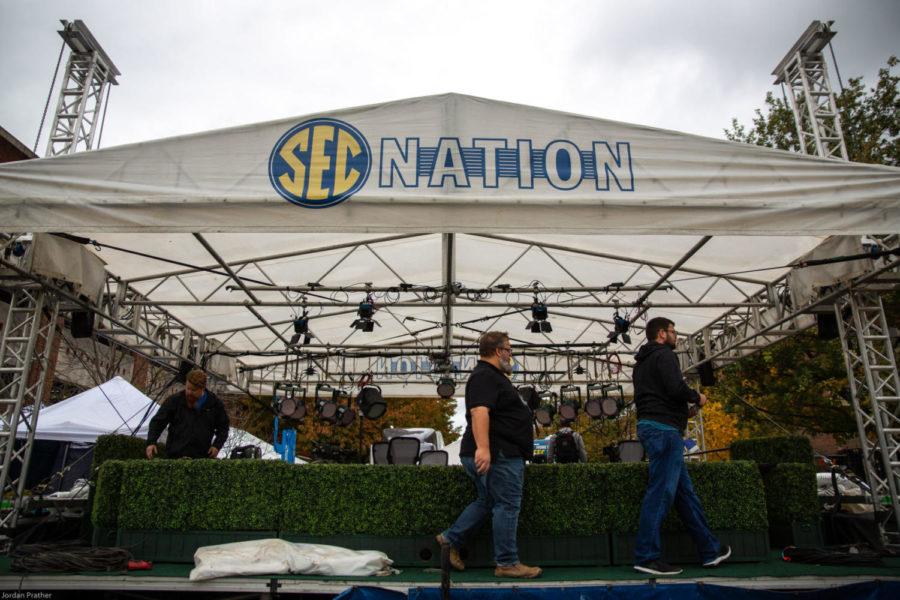 SEC Nation has set up shop on UK’s campus.

The popular pre-game analysis show will be broadcasted live from UK’s campus on Saturday, Nov. 3, in anticipation of the UK-Georgia matchup. This will be UK’s third time hosting SEC Nation since 2014. The broadcast will run from 10 a.m. to noon. All students are encouraged to attend the recording, which will take place in front of William T. Young Library.

The broadcast’s location was decided by UK in coordination with ESPN, according to UK Athletics communications director Guy Ramsey. Ramsey said the area in front of Willy T– commonly known as “the bowl”– is a “great spot” for the broadcast because it is large enough to accommodate large crowds and it provides a great visual backdrop for the taping.

“When you watch SEC Nation… on the cameras, they’re always trying to show off a really nice part of campus,” Dawson said. “They want a lot of fans around there, and that’s the best area for them to do that.”

Both UK and ESPN are working hard to prepare for Saturday’s broadcast. The bowl will be decorated with the UK logo this week. Meanwhile, SEC Nation’s broadcast setup has begun, blocking off much of the walkway between Willy T and central campus.

ESPN PR Coordinator Amanda Brooks said setup for SEC Nation usually begins on the Wednesday before gameday, but the process of deciding which schools to attend each season begins several months in advance.

According to Brooks, the ESPN production team identifies key games for every week before the season. However, the itinerary isn’t final.

“As the weeks go on and the season takes shape, we can lock in on which game we want to cover,” Brooks said. “Sometimes, we know days or weeks in advance. Sometimes, we wait to see how Saturday plays out.”

“[UK] is 7-1 and number 11 in the polls, number 9 in the college football rankings, and the fact that Georgia is doing so well, that is absolutely why they’re here,” Dawson said. “Kentucky football is being talked about now more than it’s ever been talked about.”

Ticket sales support the hype. The UK-Georgia game has been sold out for weeks. But students without tickets can still take part in the excitement. Attending the SEC Nation broadcast will be free. According to UK Athletics press release, attendees will be eligible for free prizes, including an SEC Nation shirt for the first 200 arrivals. Free food and gear will also be available.

SEC Nation broadcasts to thousands of viewers around the world, but the most important watchers this week may be here in Lexington, according to Dawson.

“Coach Stoops is famous for saying, ‘It takes all of us, all the time,’” Dawson said. “They [the UK football team] needs the fan support, too. So, I think SEC Nation being here helps with that because fans want to be a part of that.”

Fans who want to be “a part of that” can show up to William T. Young Library on Saturday, Nov. 3, for the 10 a.m. broadcast. Tickets are not required.