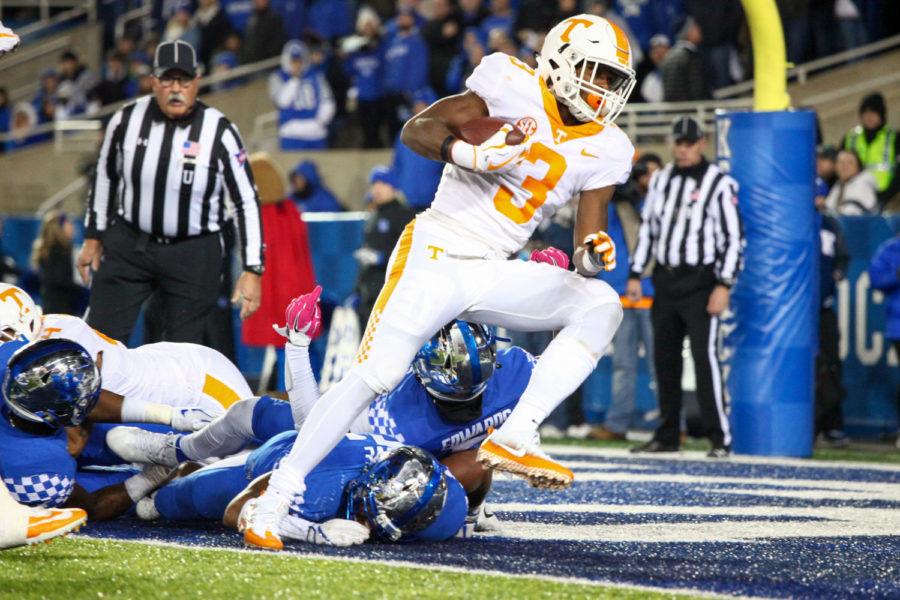 Tennessee Volunteers running back Ty Chandler scores a touchdown during the game against Tennessee at Kroger Field in Lexington, Ky. Kentucky won 29-26 on Saturday, October 28, 2017.

The Kentucky Wildcats visit Knoxville and the Tennessee Volunteers for their eighth and final SEC game of the season. The Wildcats are 7-2 overall and 5-2 in conference play, while the Volunteers are 4-5 overall and 1-4 in the SEC.

The Volunteers lead the all-time series 79-25-9, and Kentucky has struggled in Knoxville since 1985— the Cats are on a 16-game losing streak in Neyland Stadium.

The Wildcats come into this matchup with a devastating 34-17 loss to the Georgia Bulldogs in which Kentucky was held to under 100 rushing yards with a total of 84. Seventy-three of the team’s rushing yards came from running back Benny Snell.

The Volunteers came into the season with a new head coach Jeremy Pruitt after the firing of previous head coach Butch Jones. Pruitt was the defensive coordinator at Alabama for two years before being hired by the Volunteers. His defense while with Alabama ranked second in total defense the two years he was with the Crimson Tide.

“The quarterback throws a real good nine route, you know a go ball, and the receivers go get it,” Kentucky linebacker Josh Allen said.

On the ground, the Volunteers are led by two sophomore backs, Tim Jordan and Ty Chandler. Jordan has rushed for 414 yards and two touchdowns, and Chandler has totaled 371 yards and one touchdown. One hundred eighty-three of Chandler’s yards are through the air, and he’s caught three touchdown passes.

Wide Receivers Josh Palmer and Marquez Callaway are the top two receivers for the Volunteers. Palmer has 414 yards and two touchdowns while Callaway has 402 yards. Jauan Jennings has also caught three touchdowns passes for the Vols.

Despite the team’s record, the Volunteers have upset 21st ranked Auburn earlier this season, ending their 11-game losing streaks to SEC opponent.

The defense, led by edge rushers Kyle Phillips and Darrell Taylor, are identical in sacks (3). Phillips has totaled five tackles for loss and Taylor has four. Taylor also has two forced fumbles this season. The secondary is bolstered by Freshman cornerback Bryce Thompson, who has three interceptions on the season.

The line on the game is Kentucky by six and the over/under is set at 42.5. The game will kickoff at 3:30 p.m. and will be broadcast on the SEC Network.