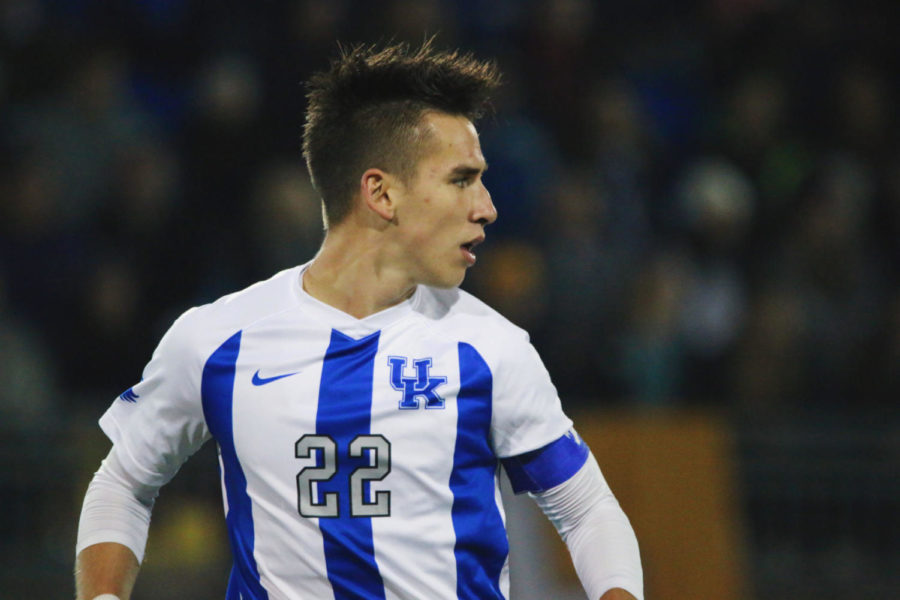 Senior defender Tanner Hummel gets ready to defend the ball during the game against Lipscomb University at the Bell Soccer Complex on Saturday November 24, 2018 in Lexington, Kentucky. Kentucky defeater Lipscomb University 2-1. Photo by Olivia Beach | Staff

Nothing came easy for the UK men’s soccer team on Saturday night, but they did what they needed to do to get one win closer to the College Cup.

Bailey Rouse gave the Cats the go-ahead score in the 82nd minute to break a 1-1 tie. C-USA Freshman of the Year Jason Reyes also added on a goal of his own in the 75th minute.

Right out of the gate, UK tried to send a statement to Lipscomb’s defense. Nicolai Fremstad and J.J. Williams each tried to shoot the ball toward the net in the seventh minute, undefended, but Lipscomb goalkeeper Chris Zappia was there for the stops.

The Cats encroached into Lipscomb territory several times during the first half, but Lipscomb’s defense either disrupted the Cats’ ball movement or Zappia was making the saves. Zappia had six saves in the first half.

UK also had a handful of close shots that went high above or wide from the net. Williams and Reyes each had some missed shots that were close to becoming goals. The Cats outshot Lipscomb in the first half 11-3 and 20-10 in the game.

The first 30 minutes of the second half seemed to emulate the first half. However, the Cats would soon end the scoreless monotony in the 75th minute.

After a takeaway by UK led to a drive down into Lipscomb territory, Lipscomb broke up what seemed to be another dead drive by the Cats. But the Cats soon found new life after Fremstad and Marcel Meinzer just barely got the ball and squibbed it over to Reyes. Reyes quickly pinballed the ball into the net for his eighth goal this season to give UK a 1-0 lead.

The celebration was short lived, though, as Lipscomb had a breakaway of its own 20 seconds later, getting the ball over to Ryan Birchfield. Birchfield crossed the ball over to the Bisons’ leading scorer Logan Paynter who finished for the equalizing goal.

The goal allowed by the Cats’ goalkeeper Enrique Facusse was only the second goal conceded by the Cats at The Bell this season.

UK showed Lipscomb why they were not ready to let their season hang in the balance. Seven minutes after Paynter’s equalizer, Meinzer crossed over a set-piece pass and Rouse chested the ball in past Zappia for the go-ahead goal. The goal was Rouse’s second this season.

UK will host the No. 11 University of Maryland Terrapins next week in the Elite Eight on a date to be announced.