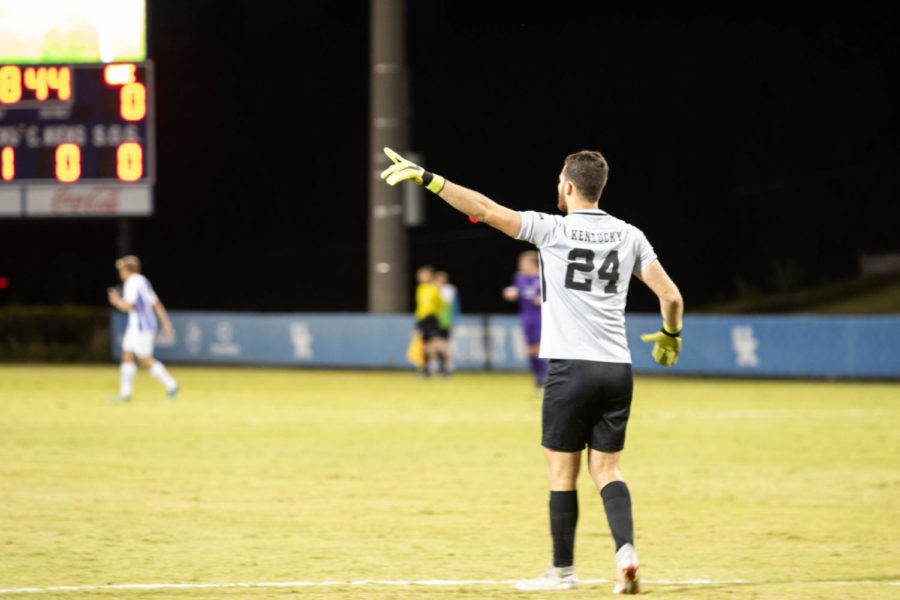 Sophomore Enrique Facusse (24) watches his opponents and tries to signal to them. University of Kentucky men's soccer team defeated University of Evansville in Lexington, Kentucky on October 24, 2018. Photo by Sukruthi Yerramreddy | Staff

After a season of trials and tribulations, the No. 3 ranked UK men’s soccer team will be tested one last time in the regular season this Friday, Nov. 2.  UK will take on the Old Dominion University Monarchs– the team that is tied with UK for first in the C-USA standings.

That two-way tie is what brings importance to the Cats’ matchup Friday. Whoever wins the game will be the C-USA regular season champion. The winner will also earn a first round bye in next week’s conference tournament in Charlotte, North Carolina. UK last won the regular season title in 2015.

Defensively, UK has conceded only one goal at home this year. The Cats’ defense’s 0.49 goals-against average is ranked third in the nation.  Goalkeeper Enrique Facusse boasts an 85 percent save percentage. That is good for ninth in the nation and second in the C-USA.

On the other side of the ball, UK’s scoring offense ranks eighth in the nation and first in the conference with a 2.31 scoring average. Team captain J.J. Williams is an instrumental piece behind that. He has a conference-leading 14 goals this year, which also ranks fourth in the nation.

Kalil Elmedkhar is another big name on offense. He has seven goals this season and leads the team in assists with seven. Four different freshmen have each scored at least two goals. One of them is Jason Reyes, who has six.

As the only senior, team captain Tanner Hummel will be honored before the game as a part of senior night. He is also the only active player remaining from UK’s 2015 C-USA regular season championship roster.

The game begins at 7 p.m. SEC Network+/WatchESPN will be streaming the game.