Rose Street paintings not done with students in mind 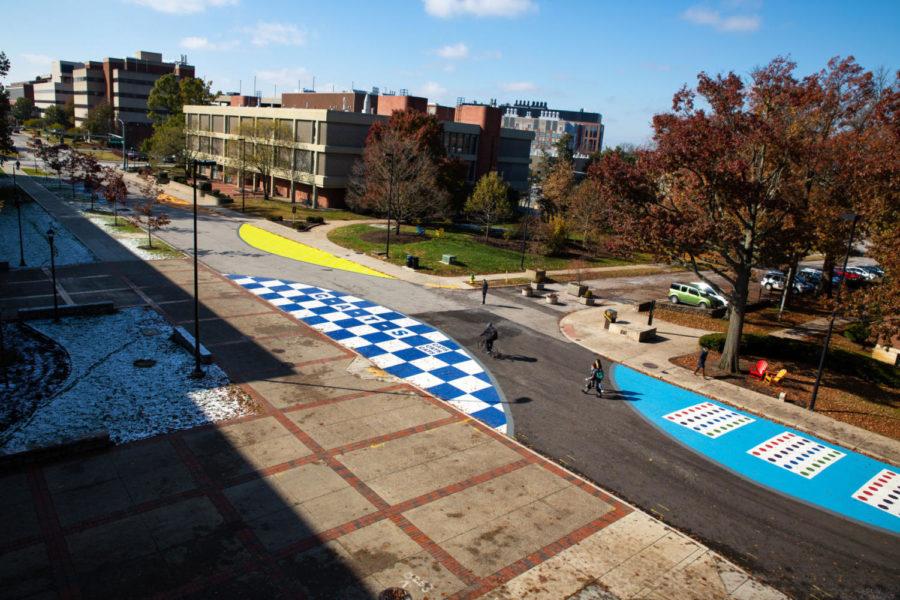 A portion of Rose street is lined with painted half-circles in front of Rose street garage and Don and Cathy Jacobs Science Building at the University of Kentucky in Lexington, Kentucky. Photo by Jordan Prather | Staff

Rose Street has been closed due to construction for the last two years and will remain closed. Earlier this semester, students were treated to a variety of colorful semicircles on the walkway. It is unclear what the administration wished to accomplish with this.

One semicircle has sports twister dots, one has a checkerboard, one has blue Kentucky shapes against a light green backdrop and one even has fake turf. Random plant holders have been placed on the walkway as well. It appears the administration wanted to make this a “communal area.” Humbly, however, they completely failed.

For starters, why put fake turf when real grass is everywhere on campus? Who is going to stop and play twister? How will people play checkers with no pieces?

Many students feel as if the administration could have used this space much differently, or, at the least, should have gotten some student input.

Hina Iqbal, a senior neuroscience major at UK, said, “I wish they consulted students first… or at least had more student interest in mind. There are a lot of kids who skateboard there. What if they’d made, like, painted on ‘roads’ or ‘sidewalks’ that you could kind of have fun with and follow.”

Other students thought UK could have shown its diversity.

“I think it would’ve been cool if they had a design contest and different organizations could propose ideas for small areas of the road; they could design something that represents what the organization stands for. It could be a nice way to showcase the diversity of the student body,” said Habiba Ahmed, a junior neuroscience major at UK.

I think UK should have hired local artists to paint murals on the pavement. Lexington is already known for having many murals around town, and this would be a good way for UK to embrace the city’s culture. It could have been a place where people could take pictures, and a fun stop on UK tours as well.

Ultimately, the walkway will be used simply for walking. Making it into something else requires much more forethought and planning. The administration should have worked harder to ensure that the money spent on the space was worth it and had students’ opinions in mind. If they could not do that, then the walkway should have been left as is.