Washington is the difference maker in win over North Dakota 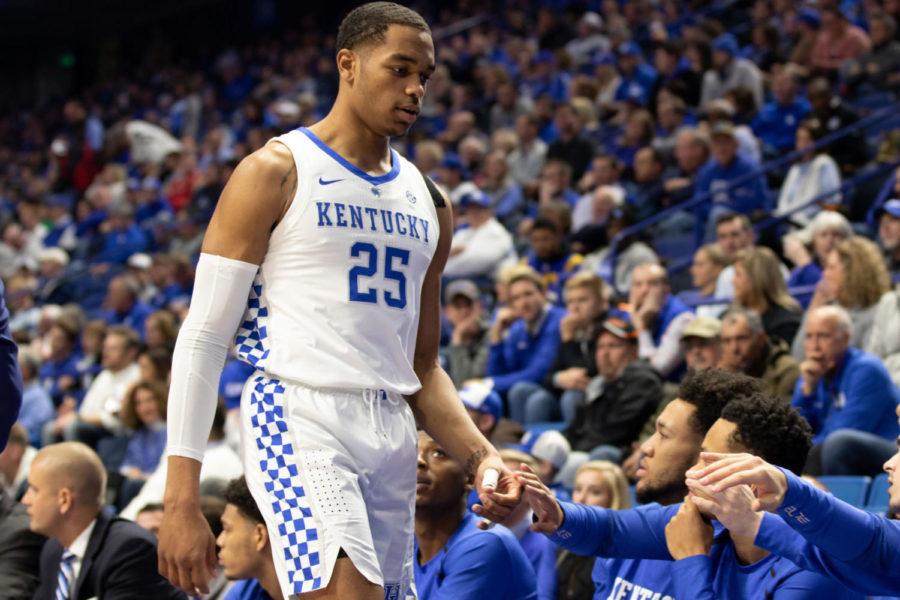 Kentucky forward P.J. Washington found his stride in his team’s 96-58 win over the University of North Dakota late Wednesday night after producing just eight and three points in the first two games of the season.

Washington didn’t get off to an incredibly hot start as he won the tip, turned the ball over and was benched and replaced by Nick Richards only 58 seconds into the game. He quickly fixed his mistakes, though, and ended up finishing with a career-high 25 points, despite playing just 17 minutes in the game. He added seven rebounds, one assist, one block and a steal.

The most impressive aspect of Washington’s career-high game was his three-point shooting— the sophomore went 4-of-5 from beyond the arc, which was also a career-high for him. Washington said the difference between tonight and the first two games was not getting into early foul-trouble.

“I feel like the first two games I got into foul trouble really quick,” Washington said. “I just tried to be solid and tried to get rebounds and just tried to create for everybody. Just tried to knock down some shots. I feel like once I saw a couple go in, it just kind of opened up for me.”

Washington’s shot selection was all over the place, ranging from threes, to layups, to dunks, and he said he credits it to just simply being open in a variety of different spots.

“I just felt like I was open, so I mean I just took it… We’re confident in everybody here and I feel like as a team more guys can shoot,” Washington said.

Being behind the three-point line is something Washington feels comfortable with and said he’s working on every day.

Kentucky head coach John Calipari said Washington has been working on his shot after there were things that he needed to fix from last season. Calipari doesn’t expect him to stretch the floor like he did tonight in every game, but he said he can definitely shoot the ball.

“And the other thing is, like I told him, I said if he chooses to come out and play with that kind of intensity, he’s a difference maker. He’s a separator…” Coach Cal said. “When he competes and goes after it, he’s physically tough, he’s mentally tough, he’s skilled, he’s just got to do it. That’s who he’s got to be every moment he’s on the court.”