Where does Kentucky go after loss to Georgia? 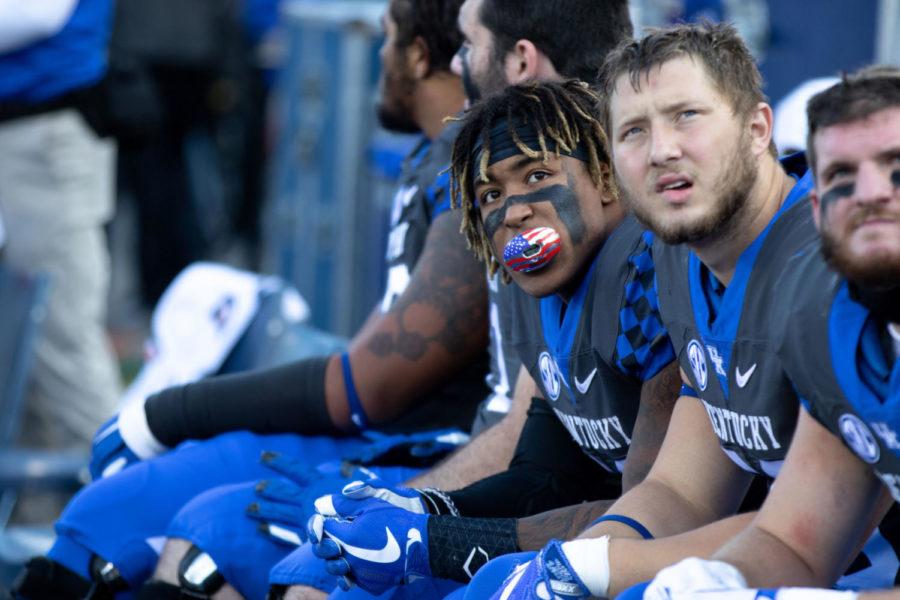 Kentucky Wildcats running back Benny Snell Jr. (26) watching the defense play from the sidelines. University of Kentucky football lost to No. 6 Georgia 34-17 at Kroger Field on Saturday, November 3, in Lexington, Kentucky. Photo by Michael Clubb | Staff

All week, Kentucky football fans had one constant thought on their mind: Saturday’s SEC East deciding game against Georgia.

A Kroger Field record 63,543 fans came to the football stadium on Saturday afternoon to see the Wildcats face the Bulldogs, with the winner booking a trip to the SEC Championship game. Ultimately, the moment proved to be too much for Kentucky, as Georgia defeated the Wildcats 34-17.

“Any time you invest as much as we do into these games and put ourselves in that position, it’s going to hurt,” head coach Mark Stoops said of the loss after the game.

Kentucky was beat in nearly every aspect of the game. Georgia had 444 yards of offense against the Wildcats, highlighted by its rushing duo of Elijah Holyfield and D’Andre Swift, who both rushed for career highs.

On the other side of the ball, the Bulldogs took out Kentucky’s key playmakers, preventing the Wildcats from fully finding their rhythm. Running back Benny Snell only managed 73 yards on 20 carries, with 12 of those yards coming from the second half.

“Really you have to give credit to Georgia, they beat us in all phases,” Stoops said.

The loss took a lot of wind out of the sails for Kentucky football. All the hype that surrounded the Wildcats and the chance of them making the SEC Championship, possibly the College Football Playoffs, is gone, and not coming back.

With nothing major ahead on the schedule, at least to the magnitude of this weekend, Kentucky finds themselves searching for motivation, especially coming off the toughest loss of the season.

Where will they find that motivation? At the next practice.

“Guys like myself and Josh (Allen), Kash (Daniel), we have to give this the 24-hour rule essentially,” senior tight end CJ Conrad said after the game. “Like a win or a loss, you can feel sorry or happy for yourself then on Monday we have to punch the clock and get ready for Tennessee, and that’s what we’re going to do.”

Even though the chances of an SEC Championship or College Football Playoff berth are gone, there’s still a lot left for the Wildcats to accomplish.

Kentucky sits at 7-2 with a chance to finish the season with 10 wins. Kentucky’s next three opponents have a combined record of 12-15, and the Wildcats should be the favorite in those final three games.

Of course, there’s the bowl game at the end of the December, which should be a pretty good one if the Wildcats finish 10-2. A 10-2 record would be Kentucky’s best regular season finish since 1977, when a Fran Curci coached Kentucky team went 10-1 to finish second in the SEC.

Even though the SEC Championship ship has sailed, a lot still rides on the remainder of Kentucky’s season. It may be hard to get as excited for the finish compared to the hype of this weekend, but Kentucky plans to take advantage of what they still can accomplish.

“That wasn’t the route for us and now we got to do our other route, let’s just win it all, win the rest of them,” Snell said.