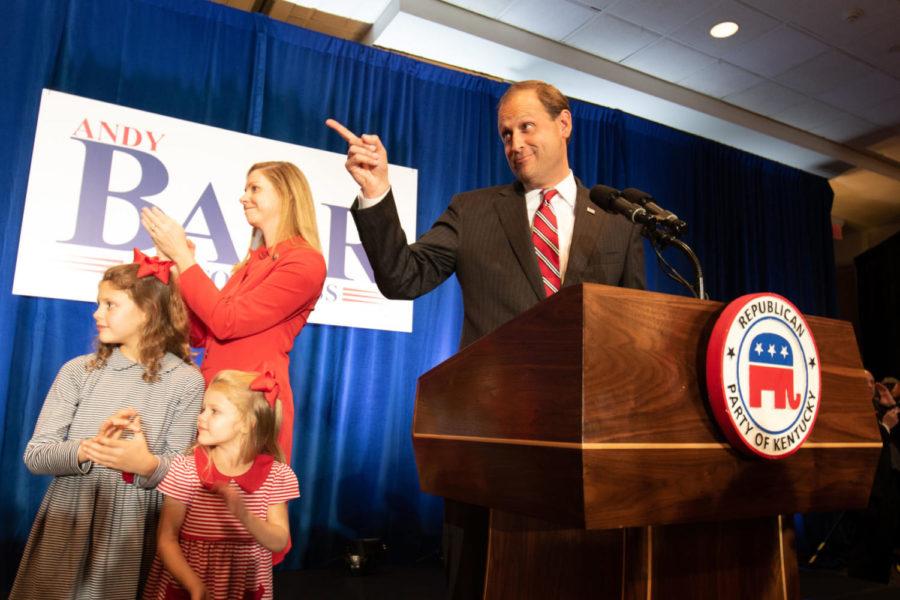 After defeating his Democratic challenger in a close, heated race this election day, incumbent Congressman Andy Barr said the one word to describe what he felt was “gratitude.”

In his speech at his election night celebration at the Griffin Gate Marriott in Lexington, Barr expressed his gratitude to many, from his “Lord and Master” to his family to his campaign staff and volunteers.

He also expressed gratitude to McGrath.

“I thank her for her determined challenge, which has helped produce the kind of vigorous discussion a healthy democracy requires,” Barr said.

Things grew solemn at McGrath’s election event, held at Eastern Kentucky University’s Center for the Arts, as the results were announced.

“Unfortunately we got so close,” McGrath said in her concession speech. “But voters decided to remain on the current path. I respect their decision.”

Barr has served as the Sixth District’s representative since 2013, after beating Democratic incumbent Ben Chandler in the 2012 election, carrying 50.6 percent of the vote compared to Chandler’s 46.7 percent.

This year’s election results more closely matched the numbers in 2012. In both of Barr’s previous reelection campaigns, he received at least 60 percent of the vote against his Democratic challengers.

This race between Barr and McGrath brought big names to the Bluegrass, including President Donald Trump and his son Donald Trump Jr. to stump for Barr, while former vice president Joe Biden campaigned for McGrath.

READ: ‘We are going to win, win, win.’ Trump rallies Kentuckians for Barr

The race had been labeled a toss-up by many pollsters despite the advantage that incumbents often have. The national importance of this race had been stressed by many, including by Trump himself.

Barr reiterated in his speech that he welcomed the competitive nature of this race— even though most candidates try to avoid this level of competition, he said.

“But as our beloved Wildcats regrettably discovered last March, you don’t always bring your best game when the path to the Final Four seems too easy,” Barr said, just minutes before UK men’s basketball tipped off against Duke. “I think Kentucky will play a better game tonight because Duke represents tougher competition. And Amy McGrath was tough competition.”

McGrath, a retired Marine, focused her campaign on the slogan “Country Over Party.” She consistently stated throughout her campaign that America’s government desperately needed change, and that she was running to help instill that.

Another major draw to McGrath’s campaign was her refusal to run attack ads against her opponent. This choice gained more national attention for the race.

“We, as a nation, have to bridge the partisan divides that seem to be broadening in our country,” McGrath said. “We must demand a more civil tone and tenure in our politics. We deserve better than a win at all cost mentality. I was unwilling, and will remain unwilling, to be part of the problem.”

Barr’s election celebration grew more crowded as the night went on, with lots of Barr stickers and Make America Great Again hats visible among the crowd.

UK biology and mathematical systems junior Taylor Williams volunteered with Barr’s campaign and attended the celebration on election night. She didn’t actually vote for Barr, though— because she is registered to vote in her hometown of Hazard, Kentucky.

She said she didn’t move her voter registration because she also volunteered with some local races in Hazard.

“I decided to get involved with the Barr campaign just because I believe in the work Andy has done in his congressional terms recently, and I just think that he’s represented the commonwealth and the district well,” she said.

She said she was offered the opportunity to get involved and “took advantage of that.”

A few minutes before the race was called in favor of Barr, when about 85 percent of precincts had reported, Williams said she was “really excited.”

“…Excited to see the outcome, excited that we’re trending in a positive direction,” she said. “And excited for the future, regardless of the outcome, knowing that this campaign has had an influence on the state.”

Williams said she was really encouraged by how involved young people, specifically UK students, have been in this election.

“The number of students that I heard say they had moved their voter registration to Lexington and got to vote right on campus today was so encouraging,” she said. “Just knowing that this younger generation is making our voices heard.”

Paris resident Rebecca Mance was an excited attendee at Barr’s election night celebration. One of the first people to arrive, she claimed a spot right in front of the podium and could be seen dancing along to the country songs playing over the speakers.

Mance, who is a paralegal, moved here from San Francisco in 2008 because she wants jobs and money to come to this area.

She said she wanted to come to Kentucky “because in every election, Kentucky always goes red first.”

She said she supports Barr “because it’s all about people having jobs and money.”

She said that Democrats focus on race but aren’t actually helping people of color; she compared the welfare system to plantations and said actions like that actually prevent equality. She said she wants everyone to have the same opportunities to work hard.

“I want us all to be together, working together as a team,” she said. “And that’s why I’m dancing here in front of the stage.”

As results were still coming in, Mance was hopeful for a Barr victory.

“One way or the other, if you’re a positive thinker, and you’re following the dream that he [Barr] has… we will win in the end,” she said.

“Tonight, thanks to the people of central and eastern Kentucky, that journey continues.”

Ahead of McGrath’s event on Tuesday night, more than 1,000 people had marked on Facebook that they were interested in attending. According to the event posting, McGrath spent the primary election night in Madison County and wanted to spend general election night there as well.

In attendance was Lauren McCord, accompanied by her niece Stella Foley. Both are Richmond natives.

“This is my niece, she’s 10 years old,” McCord said. “She’s never been to something like this before and I wanted to show her women in politics.”

Also in attendance was 14-year-old Madeline Cronen of Lexington. Though Cronen is unable to vote, she still attended the event to support McGrath.

While McGrath and the Democrats didn’t win in Kentucky’s Sixth District, not all are seeing it as a loss, including Azis Toktobaev, who is from Kyrgyzstan but is attending Berea College.

“If you look at two years ago in the same exact election, the Democratic candidate lost with 38.9 percent,” Toktobaev said. “Looking at these elections, Amy with 47 percent, with only six to eight thousand people in the margin. It’s absolutely phenomenal what she’s doing, the people that she’s pulling… getting people like me, who can’t even vote in this country, to come out and canvas for her in counties like Madison.”

McGrath encouraged voters to get up tomorrow and push on.

“Folks, we can lick our wounds tonight,” McGrath said. “But just tonight. Let’s shake it off in the morning, get back on the horse and resume our work for a more perfect union. Our country depends on it.”