For an audience of one, UKPD’s active shooter training proves relevant 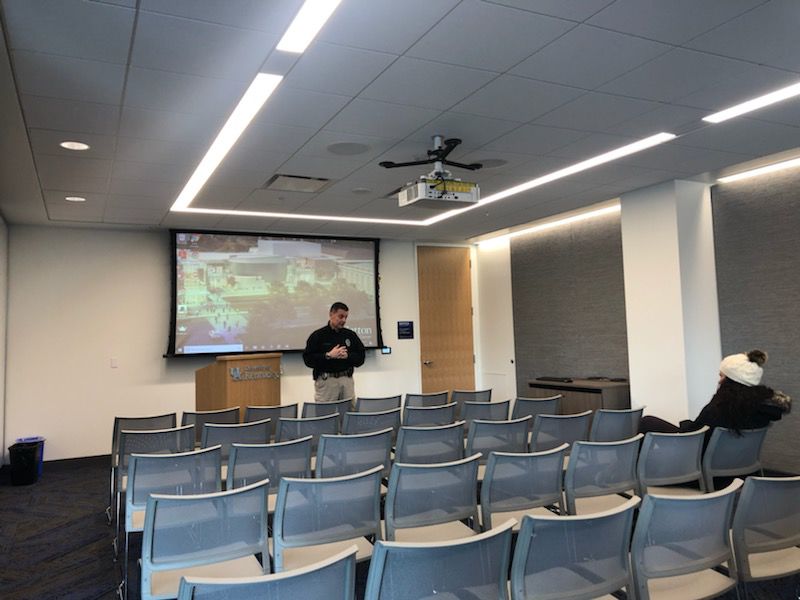 There were 42 seats in the UKPD’s “active shooter training” Tuesday, but only one was filled by a student.

Officer Alan Saylor has been training the public on how to avoid disaster since 2005. It’s been his job to prepare people to face mass shootings, but on Tuesday his instruction room was nearly empty.

Sophomore psychology major Megan Blackford was the only student audience member to attend the UKPD’s training, the first in a series of monthly instructions intended to prepare the UK community for the worst.

“With everything that’s been going on, especially on UK’s campus with the whole bomb threat stuff, I just wanted to make sure I’m fully equipped if something were to happen,” Blackford said.

While “shots fired is the last thing you’d expect to hear on campus,” according to the UKPD website, that doesn’t mean you shouldn’t be prepared.

“The big thing we need to do is to keep you prepared, because it’s going to end up that you’re going to be frontline defense on a lot of this,” Saylor said.

UKPD officers train about twice a year in order to stay sharp, should an adverse event like a shooting occur, according to Saylor. These trainings are typically followed by a self-evaluation.

“We use actors and we try to make the scenario as real as possible, so we can duly evaluate our officers,” Saylor said.

But Saylor was adamant that even for students and faculty, a comprehensive training could save your life.

“Seventy-five percent of the time it’s on the public, it’s on individuals to do some things to mitigate injuries and to mitigate killings. That’s why we need to teach this,” Saylor said.

To the rows of empty seats at Tuesday’s training, Saylor taught that maintaining a proactive “survival mindset” is what could keep members of the UK community safe during a campus shooting. He said from start to finish, the average mass shooting only lasts about five minutes, which leaves little time for one to think.

“It’s too late to be thinking about what you’re going to do when the shooting is happening,” said Saylor. “Are you going to be able to think your way through it?”

That’s why things like staying vigilant, getting out, hiding out and keeping out were all echoed as survival solutions during the training.

The chairs in the front rows didn’t seem to care too much, but to Megan Blackford, Saylor’s training provided some solace.

“I definitely think it’s very important, because this just keeps happening. There are active shooters all over the place, college campuses, elementary schools. I think it would be good if everyone was informed as much as they could be,” Blackford said.

And the UKPD maintains the same sentiment.

“The fact is, we want our community to be prepared in the unfortunate event that something that could happen,” said UK Police Chief Joe Monroe.

That includes the entire community, according to Monroe. That’s why UKPD will continue hosting its active shooter training every month.

“We want to make it available to people who are maybe in class, or can’t attend, or their job responsibilities don’t let them attend. So we’re trying to be very flexible,” Monroe said.

So whether there’s an audience of one or 42, expect to see the UKPD working to prepare the campus community.