Keldon Johnson is UK’s go-to player, thanks to explosiveness 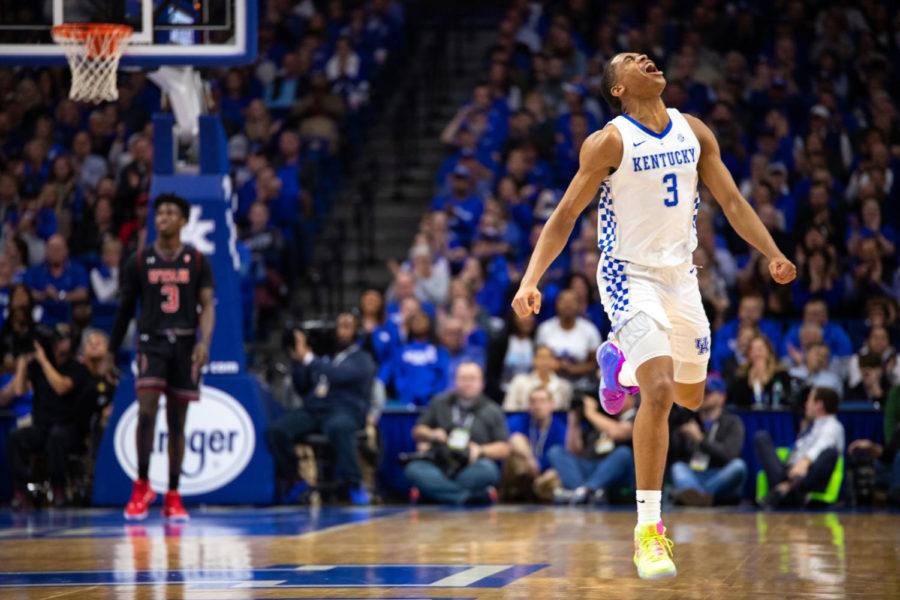 Kentucky freshman guard Keldon Johnson screams in celebration after hitting a three-pointer during the game against Utah on Saturday, Dec. 15, 2018, at Rupp Arena in Lexington, Kentucky. Kentucky won 88-61. Photo by Jordan Prather | Staff

Following a humbling loss in Madison Square Garden to an inferior Seton Hall team, UK righted the ship on the back of one particularly energized small forward: Keldon Johnson.

Throughout the season, Johnson has been human dynamite for the Cats. He’s taken charges and steals, blowing plays up defensively and detonating on the rim when he gets an open lane. Against Utah at home, the 6-6 wing was no less valuable.

He started his day like he was Wenyen Gabriel, shooting 5-5 from deep in the first half for all 15 of his points in that period. The slasher-turned-sharpshooter was the Utah zone’s nightmare, scoring at will and not forcing a bit of it. His play was effortless and efficient as he projected a persona of a bad dream rolling in for future teams.

“Shooting with confidence, that was the main thing” Johnson said after the game. “My teammates were just telling me to keep shooting.”

He’s exactly what the Cats have been lacking this year, as well. Against the Pirates, P.J. Washington was the go-to guy. Against UNC Greensboro, it was Reid Travis and Tyler Herro. By my count, this is the only game this year in which Johnson was the clear-cut “go-to” player. In his other big games, he’s shared that title with a teammate.

Johnson claims that role willingly, as well. Asked whether he was stepping into that role, he simply said that he isn’t “afraid to take a big shot or step up in a big moment.” The game against the Utes had far less “big moments” than it could have, thanks to Johnson nearly outpacing the visitors in the early going.

Even teammate Immanuel Quickley said the game was “super easy” playing next to Johnson. “I just catch the ball, swing it and he makes the shot. That’s how easy it is.”

Against Utah, he finished with 24 points on 8-9 shooting, the first Cat since Julius Randle to score at least 24 while taking less than 10 shots. In Randle’s performance, however, the now-NBA forward made 13 free throws to go with his six made baskets. Johnson’s show today featured only two free throws from the freshman. The only other player to score as many points on a Power 5 team in a shooting performance like Johnson’s was Anthony Davis, who scored 28 on Vanderbilt shooting 10-11 from the floor.

Johnson’s game Saturday is going down in the Calipari history books, though it won’t be recalled years from now. What it does mark is consistency from Johnson, and an ability to explode when needed. His “human dynamite” status won’t be going anywhere if he continues to score at a clip this blistering moving forward.