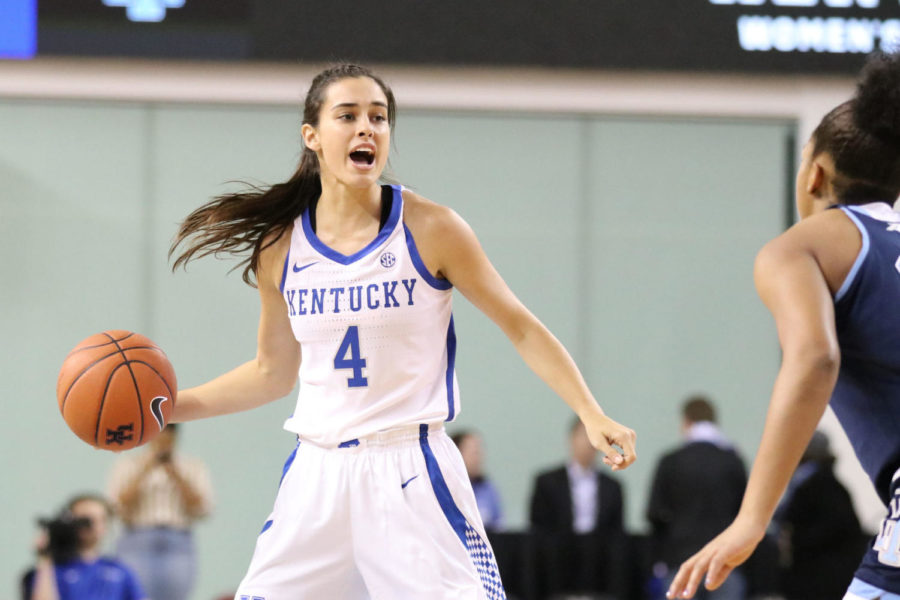 Senior Maci Morris talks to her teammates during the game against Rhode Island on Thursday, December 6, 2018, in Lexington, Kentucky. Photo by Chase Phillips | Staff

The UK women’s basketball team beat the Rhode Island Rams 75-52 Thursday night, moving the Wildcats to a perfect 9-0 to start the season.

Kentucky got off to a slow start in the game. The Wildcats haven’t played a game in over a week, and the rust showed. The Cats shot just 29.4 percent from the field in the first quarter and 28.6 percent from 3-point range. Kentucky’s shooting improved, but not much. The Wildcats ended the game shooting 33 percent.

Head coach Matthew Mitchell attributed UK’s slow offensive night to Rhode Island’s zone defense. “Against this 3-2 zone tonight we just weren’t real sharp. We’ve had a couple of days where we’ve tried to work on that and that’ll get better.”

A mixture of defense, a few key whistles and impressive play from star senior Maci Morris saved the Wildcats from trailing early.

The Wildcats forced 17 turnovers in the first half against a team that averages 19.1 a game. Kentucky’s defense never let up, forcing 30 turnovers by the end and stealing the ball 17 times.

The Rams fast and physical play put them in foul trouble early in the game. Rhode Island’s Nicole Jorgenson and Jalissa Ross each picked up two quick fouls, limiting their play to five and seven minutes, respectively, in the first half. Ross fouled out in the fourth quarter.

Morris scored or assisted on UK’s first ten points. She made her first three shots of the game, two coming from beyond the arc. Rhode Island’s bench began yelling, “shooter!” every time Morris was open after that point. Even with the bench watching Morris like a hawk and Rhode Island defending her as close as possible, she ended with 29 points along with five rebounds and four assists.

Freshman Rhyne Howard had another big night for the Wildcats. She had 19 points, seven rebounds and seven steals. When asked what part of her game meant the most to her, Howard said “The seven rebounds. He (Coach Mitchell) put a big emphasis on boxing out and rebounding this week so I felt I had to step up to the plate and show him what I could do.”

Howard was crashing the offensive glass against a much bigger Rhode Island front court, awarding her four offensive boards and several easy putbacks.

Morris noticed the team play harder in the third period, “The third quarter we picked up our hustle a lot. We were getting on the floor, getting some lose balls, getting some deflections… That plays a very valuable role in the team we want to be.” The Wildcats had nine- and ten-point runs in the third to separate the game. After distancing themselves early in the second half, UK never looked back.

Kentucky’s next game will be against their in-state rival, the Louisville Cardinals. The Cardinals are ranked No. 5 in the nation in the AP Top 25. Tipoff will be Sunday at 2:00. The game can be watched on ACC Network.