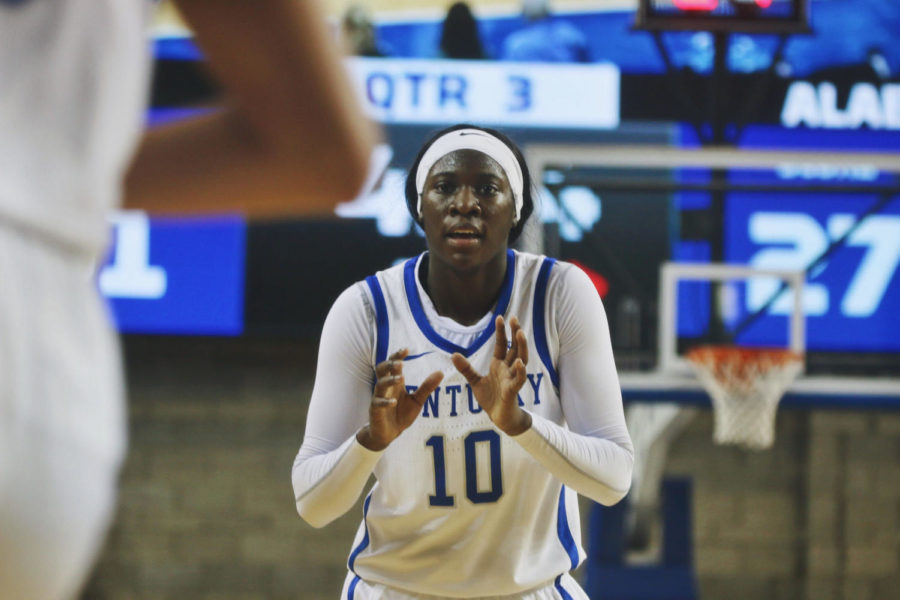 Freshman guard Rhyne Howard gets ready to gain possession of the ball after a pass during the game against Alabama State at Memorial Coliseum on Wednesday November 7, 2018 in Lexington, Kentucky. Kentucky defeated Alabama State 87-35. Photo by Olivia Beach | Staff

The Kentucky Wildcats suffered their first defeat today in an 80-75 road loss against their in-state rival, the Louisville Cardinals. The Cardinals are now 10-0 with two top 20 wins.

Louisville guard Asia Durr led all scorers with 32 points and was a dominant force for the entirety game. Draftsite.com predicts Durr as the second overall pick in this year’s WNBA draft.

Kentucky’s star freshman Rhyne Howard showed Big Blue Nation her immense potential in the rivalry game– she ended with a double-double, her third of the season, of 25 points and ten rebounds. She scored a third of Kentucky’s points and grabbed nearly a third of the Wildcats’ rebounds. On top of a stellar scoring and rebounding game, Howard ran the offense for Kentucky and ended with six assists. She led her entire team in points, rebounds and assists.

As Louisville’s win looked more and more assured late in the game, Taylor Murray stepped up and showed off her speed on the offensive end of the court. Murray has been an important defensive player for the Wildcats all year, but today against the Cardinals she showed what she can do on both ends of the floor. Murray ended with 18 points, nine of them coming in the fourth quarter.

The third member of Kentucky’s big three was quieter than usual– Maci Morris is a scoring machine, but today her minutes and shots were limited due to foul trouble. Morris averages a little over 15 shots a game, but Saturday she only shot the ball eight times. The senior shot 50% from the field and from three-point range, scoring 11 total points for the Wildcats.

The now 9-1 Kentucky will have to wait nearly a week to return to the court again. Their next game will be Saturday, December 15th at 1:00 p.m., when Kentucky will host the Middle Tennessee Blue Raiders at Memorial Coliseum. The game will be televised on SEC Network+.