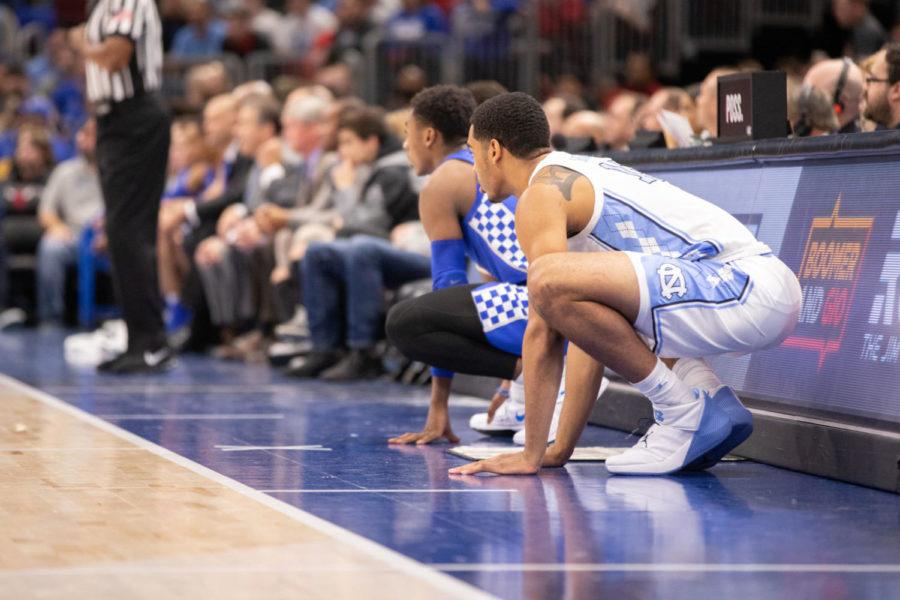 Freshman guard Ashton Hagans waiting to be put into the game while squatting next to a UNC player. University of Kentucky men's basketball team defeated University of North Carolina 80-72 in the CBS Sports Classic at the United Center on Saturday, December 22, 2018 in Chicago, Illinois. Photo by Michael Clubb | Staff

At Kentucky, swagger on the basketball court is often a “must-have”. John Wall’s salute. Brandon Knight’s jersey lift. P.J. Washington’s mean mug. After a 34-point loss to the hated Duke Blue Devils, the Cats struggled to get it back. After an overtime loss to unranked Seton Hall, it got even harder. The only glimpse of domination and looking good while doing it was UK’s second half against UNC Greensboro at home.

Against Greensboro, Hagans attached himself quite firmly to electric scorer Francisco Alonso, shutting him down nearly completely as he snaked around screens and got the Cats out in transition. He held the visiting team’s leading scorer to just three points on 1-6 shooting after he scored 19 in the first half, primarily guarded by Keldon Johnson.

Against North Carolina on Saturday, the legend of Hagans grew to a new level. He finished the game with a Calipari-era record seven steals in an 80-72 win against the Tar Heels. To go with his steals, he had three blocks, three assists and four rebounds. He took the game over and scored only seven points on 2-6 shooting.

“His defensive presence is amazing,” Johnson said after the win. “You seen it all, he was locking up, making plays, big stops and you could just see it rubbing off on everybody.”

Hagans’ aggressiveness, after telling his teammates that “the aggressor wins” before the game, leaked into his teammates and allowed them to exhibit some of the swagger the team has been longing for. In the first half of Saturday’s game, Reid Travis hit an and-one layup, his second of the game. He stepped up to the defender that fouled him and smiled coyly at the ground as the Cats held a lead they’d never relinquish.

As soon as the Tar Heels looked like they’d come back, Hagans led the team by grabbing another steal, likely leading to a pair of UK’s 20 points off turnovers and a moment of pure, infuriating attitude. North Carolina hasn’t surrendered seven steals to one player since at least 2010-11, when Sports-Reference began to track college basketball statistics.

“I’m putting the ball in his hands and he’s making the right plays,” UK head coach John Calipari said. “it was a small tweak that we made about a week ago and when I watched it, I said, ‘Okay, we got this now.’ And he’s making the game easy for everybody.”

Hagans’ presence goes even farther than hyping up his own teammates. In the second half, when Hagans was already credited with several steals, North Carolina point guard Coby White dribbled the ball off his knee just bringing the ball up the court, looking around for Hagans. A second element to earning swagger on a basketball court is instilling a healthy helping of fear into the opposing team. No Cat has done that this season like Hagans, and the other Cats are following suit.

His own team wasn’t the only one he was impressing. North Carolina head coach Roy Williams said that he watched Hagans play in high school, saying he “really liked him” when he watched him before the point guard reclassified. Describing Hagans, Williams said Hagans is “A guy that sees the defense. He’s a gifted youngster and his shooting percentage from deep is not good, but where he attacks the basket and passes the ball and defends like crazy and plays with a reckless abandon.”

Travis and Johnson are close behind, drawing fouls, making silly-looking and-one baskets around the rim and shooting dangerously well from range. The trio, led by Hagans, will be a force for the college basketball world, should they heap on this level of attitude onto opposing teams.