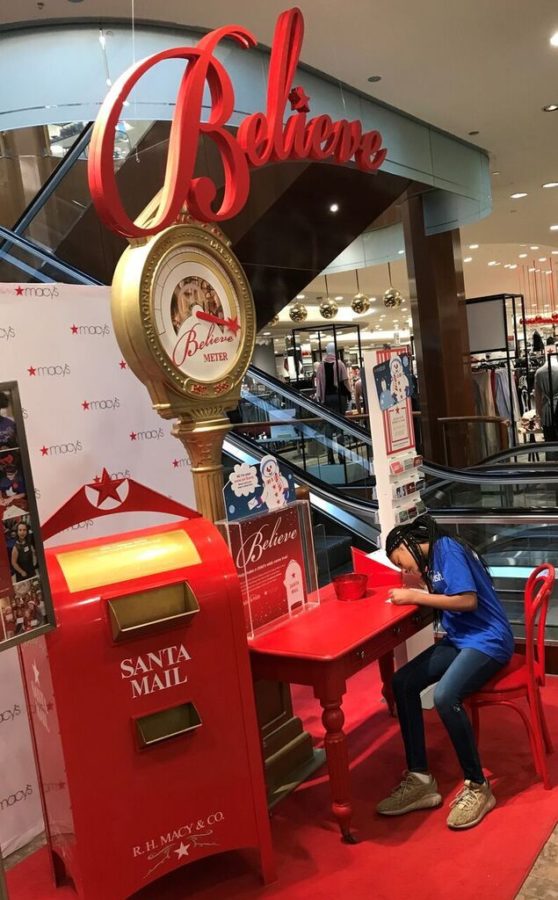 A Believe station inside Macy's where children can mail letters to Santa.

The Make-A-Wish Foundation of America grants the wishes of children worldwide. A wish is granted about every 34 minutes through the program for a child diagnosed with a critical illness, according to the Make-A-Wish website. Macy’s Believe Campaign is supporting Make-A-Wish by partnering with its program to donate a dollar for every letter submitted to Macy’s through Christmas Eve up to the goal of $1 million.

On Dec. 7, in celebration of National Believe Day, Macy’s doubled its donation for each letter collected, up to an extra $1 million, taking the goal to $2 million for Make-A-Wish.

Letters can be typed on Macy’s website and air mailed to Santa while counting toward a contribution to make a child’s wish come true. The letter can also be printed or written at a Believe station inside Macy’s and dropped at one of the Macy’s iconic red mailboxes as well to create a lasting memory for any adult or child.

One Make-A-Wish recipient is UK hospitality-management junior Hannah Thornsberry. Diagnosed with a brain tumor in high school and requiring a shunt to be put in place, she overcame her illness and became a survivor of childhood cancer.

When first chosen as a Make-A-Wish recipient, Thornsberry decided to turn it down to allow another child to have their wish granted. She was later on a plane heading to China with high school classmates when her shunt failed. Hannah then was offered the opportunity to have her wish granted, and she took it. Her wish was to visit Hawaii and meet the cast of Hawaii Five-O, according to a recent article in Summit Guide Lex.

Hannah also recently sang the National Anthem to open the races at Keeneland for their 11th annual Make-A-Wish day in October. That day’s events were able to raise $8,859 for Make-A-Wish.

Cody Dorman, a 13-year-old from Lexington, has also been a recipient of Make-A-Wish. After being diagnosed with Wolf Hirschhorn Syndrome, his wish was to meet Mark Zora, his hero.

“Since wishes have the power to help children become stronger, more energetic and more willing to fight their illness, Make-A-Wish of Lexington has asked the community to support the Macy’s Believe campaign– it’s free, simple and a perfect addition to any holiday tradition,” said Make-A-Wish representative Faith Hacker.