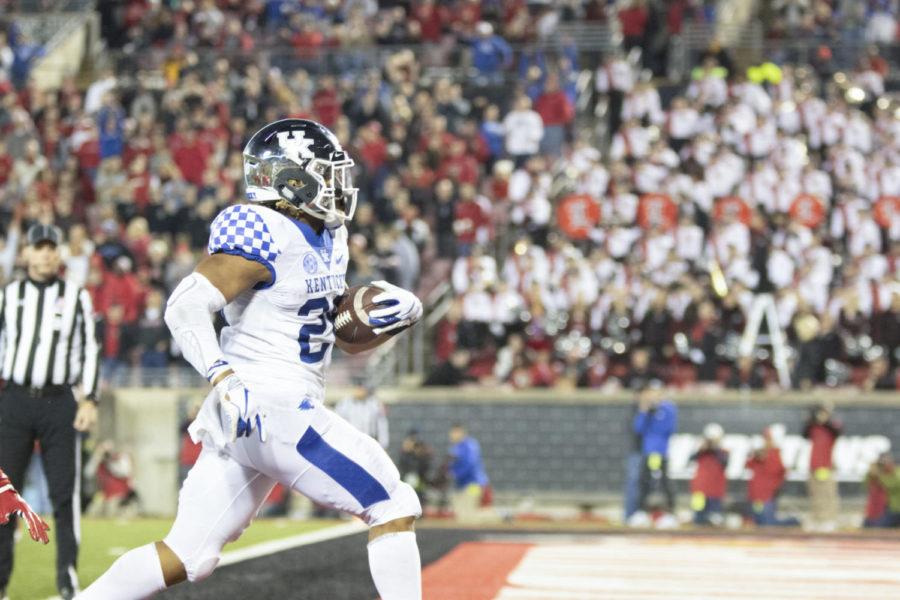 Kentucky Wildcats running back Benny Snell Jr. (26) runs in his second touchdown during a 56-10 Kentucky win over the University of Louisville in Cardinal Stadium on Saturday, Nov. 24, 2018, in Louisville, Kentucky. Photo by Rick Childress | Staff

UK football coaches and players met with the media after practice Tuesday afternoon at the Joe Craft Training Facility to discuss the team’s preparation for its upcoming VRBO Citrus Bowl matchup against the Penn State Nittany Lions on New Year’s Day in Orlando.

Gran said that the offense ran the same practices it ran last year before the Music City Bowl. He added that quarterback Terry Wilson’s “decision making” has grown the most.

“He’s been knowing to where to put the ball and he’s been getting it out quick the last two to three weeks,” Gran said. “The biggest thing right now for us is that he knows where to go with the ball.”

“They’re really physical, twitchy and fast. They do a good job schematically and they move on you,” Gran said.

House said that with Jordan Jones being out for the Citrus Bowl, there is “good pressure” on DeAndre Square and Chris Oats to step up in place of Jones.

“Football is very important to them [Oats and Square]. They’ve done a good job stepping up and playing smarter and instinctive,” House said.

House drew comparisons between Penn State quarterback Trace McSorley and Wilson. He talked about how Wilson’s ability to “put pressure on with his arms and feet” helps House understand McSorley’s playing style.

Allen added that the Nittany Lions are a “really dynamic” team and that McSorley can “take over the game.”

“They’re really fun to watch on film and I can’t wait to play them,” Allen said.

Stallings added that the game being on New Year’s Day doesn’t affect the practice system, echoing what Gran said. He did, however, discuss the importance of preparation.

“Preparation wise, what makes the game more important this year is that we’ve been to bowl games and haven’t gotten a win. We want that to build confidence for those playing at UK next year,” Stallings said.

“Getting the 10th win is extremely important for the team. These seniors want to walk out with a win.”

The Cats will depart for Orlando on Wednesday, December 26th.