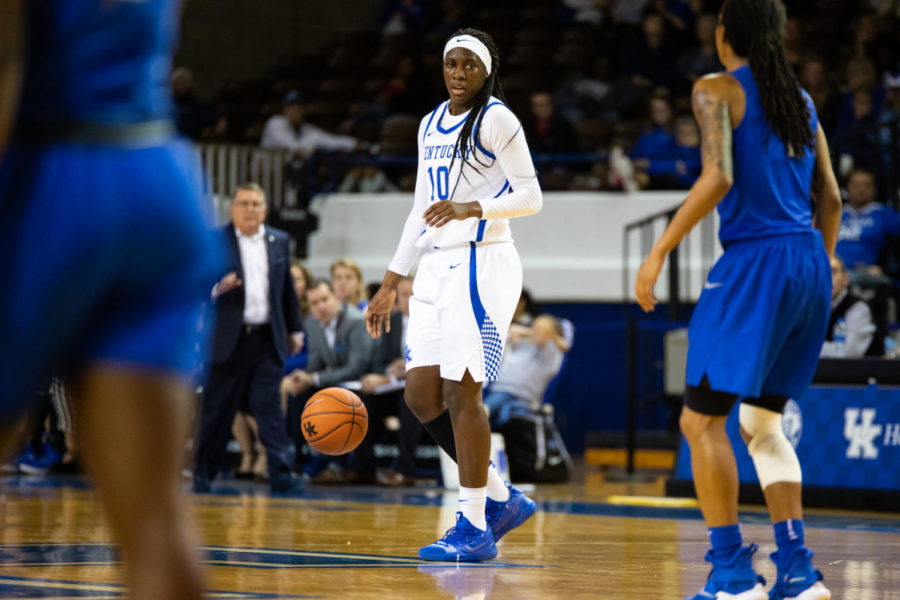 Freshman guard Rhyne Howard waits for a play to be set during the game against Middle Tennessee on Saturday, Dec. 15, 2018, at Memorial Coliseum in Lexington, Kentucky. Kentucky defeated the Blue Raiders 72-55. Photo by Jordan Prather | Staff

The no. 18 ranked UK women’s basketball team now has back-to-back wins following a 99-39 demolition of the Western Carolina Catamounts at Memorial Coliseum on Tuesday night in what was the team’s largest scoring difference this season.

Tuesday night’s matchup was the first-ever matchup between the two teams. UK was WCU’s first ranked opponent this season.

UK got off to a hot start and opened the game making five of their first six shots. They ended the quarter on a 21-6 run in the last 6:53 of the quarter. WCU had nine turnovers and the Cats scored 13 points off those turnovers. UK ended the first quarter leading 27-11.

Wyatt led the Cats’ scoring charge in the quarter with 10 points– which surpassed her previous scoring high this season of eight points.

The Cats carried that momentum into the second quarter. UK started off with a 17-0 run and made seven shots in a row at one point in the quarter. WCU’s turnover woes continued as it had eight more turnovers and shot a lethargic 29 percent from the field the second quarter.

UK entered halftime leading 56-20 after shooting 65 percent in the half. Morris and Wyatt combined for 25 points and Howard added eight points and six rebounds in the half.

Things got better for UK and worse for WCU has the Cats outscored the Catamounts 21-7 in the third quarter. Howard led the way with seven points in the quarter, while Roper also provided two three-pointers to bury the Catamounts even deeper.

Howard was the leading scorer of the night with 18 points and eight rebounds. Wyatt was 80 percent from the field and totaled 16 points, her new season high, and Roper and Murray tied the team for assists with seven.

UK, now 11-1, will come back to Memorial Coliseum on Friday, December 21st to take on in-state rival Murray State Racers at noon.