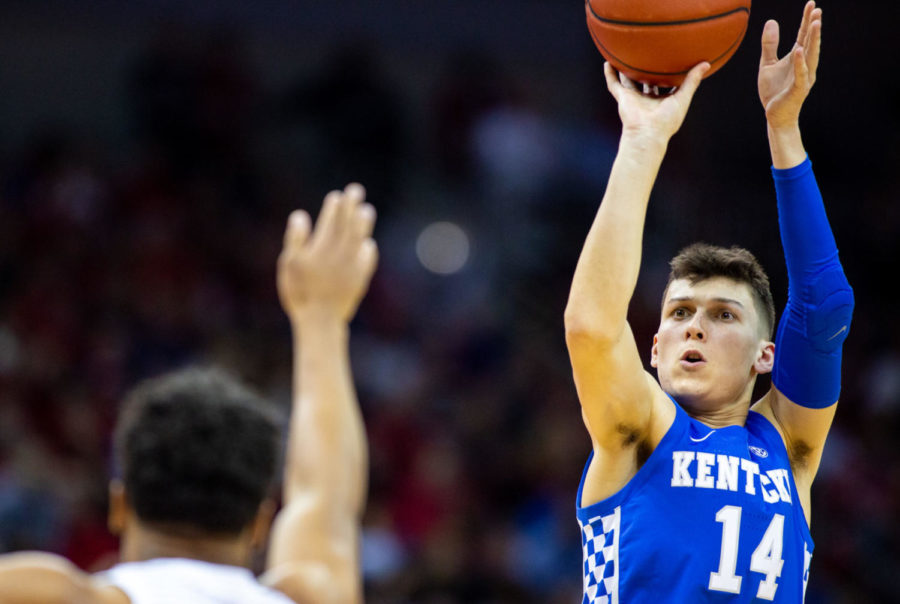 Kentucky freshman guard Tyler Herro shoots a three-pointer during the game against Louisville on Saturday, Dec. 29, 2018, at the KFC Yum! Center in Louisville, Kentucky. Kentucky won with a final score of 71-58. Photo by Jordan Prather | Staff

“Shooters shoot, scorers try to score, and I just go out there to try to do my thing.”

Post-Louisville victory, Kentucky’s Tyler Herro admitted that he hasn’t shied away from letting the ball leave his hands all season, no matter if the shots were going in.

After his lights-out performance in the Bahamas over the summer, fans were left speculating about what the sharp-shooter would bring to Kentucky come regular season. But, before Saturday’s showing against Louisville, the freshman was shooting just 29 percent from the three.

In multiple post-game press conferences this season, Wildcats head coach John Calipari was adamant about what Herro needed to do to get back on track—and that was to stop thinking too much and release quicker.

Herro found his shooting stride in his career-high 24-point performance in UK’s 71-58 win over the Cardinals and went 4-of-6 from the three while he shot 10-of-13 from the field. According to Coach Calipari, Herro’s five rebounds were just as valuable as his baskets.

“I’m trying to say to him and Keldon (Johnson), ‘what can you do to make us win when you’re not making shots?’ So you don’t make shots? Don’t worry about it, do all the other stuff to help us win ball games,” Calipari said.

Herro agrees and says that ever since he got to Kentucky, his game has been more complete.

“As far as being on the defensive end, rebounding, getting steals, anticipating, stuff like that,” Herro said. “The coaching staff has really helped me in that particular area, you know just getting better on defense.”

The Milwaukee native credits his shot improvement to staying in the gym and getting his shot off quicker like Calipari wants him to, and adds that as he gets more comfortable, things are starting to feel like the way they did over the summer.

“I sort of feel like it feels like the Bahamas, where we’re having fun and we’re going out there and competing. So I kind of get that vibe again,” Herro said.