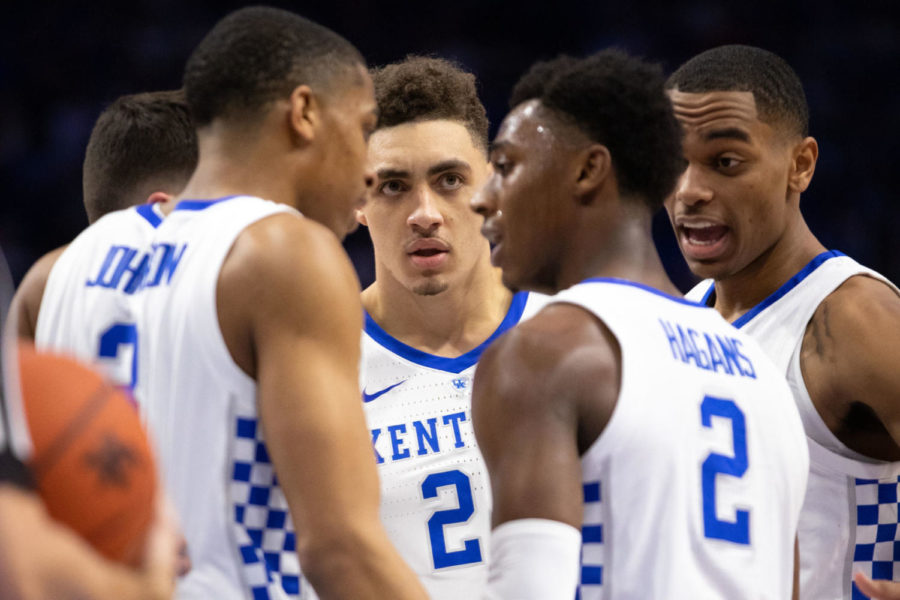 UK groups up in a huddle before a free throw. No. 8 University of Kentucky men's basketball defeated No. 9 Kansas at Rupp Arena on Saturday, Jan. 26, 2019, in Lexington, Kentucky. Photo by Michael Clubb | Staff

Finally getting to the end of a brutal three-game stretch that featured three ranked teams, the UK men’s basketball team completes the sweep with a 71-63 victory over Kansas.

The marquee matchup was the headline of the annual Big 12/SEC Challenge, featuring a series of games in which the two conference’s teams match up. The Cats once again drew Kansas as their opponent and dazzled with defense and rebounding in front of 24,387 fans.

The big men were the stars of the show for both teams, as Kentucky forwards PJ Washington and Reid Travis went head-to-head with Kansas sensation Dedric Lawson, a redshirt junior. All three forwards had double-doubles, with Lawson’s coming before halftime.

Both teams needed the presence inside, as the shooting for both teams was a major struggle. The two teams combined to shoot 13-41 from deep, with Kansas taking the advantage.

Washington and Travis finished with 20 and 18 points and 13 and 12 rebounds, respectively. On the tail end of the first half, Reid Travis scored seven consecutive points for the Cats, mostly fueled by and-one layups. He kept the offense afloat while usual scorers Tyler Herro and Keldon Johnson were combining to shoot 3-12 from the floor.

Washington saved his takeover for the second half, taking the ball directly at Lawson and other smaller defenders as he scored 20 points. 14 of those came in the second half after he spent the first half doing nothing but rebounding, grabbing nine boards in that period.

The Jayhawks’ lead grew as large as ten points in the first half, but a pair of late baskets gave the visitors only a three-point lead heading into halftime.

After the half, the Cats decided to abandon most of their hope of the bench or the guards providing any scoring. The home team finished without any bench points, and the pair of Travis and Washington combined for 38 of UK’s 71 points.

The only scoring from guards was supplemental, as wing player Keldon Johnson hit timely threes to keep the Cats ahead once they gained the lead. He finished with three triples on four attempts, while the rest of the team combined to shoot 1-14a from deep.

The poor shooting was also compensated for by nullifying any ideas the Jayhawks had on offense. The Jayhawks shot 37% from the floor, and though he finished with 20 points, Lawson shot only 7-18 from the floor.

UK will face their first unranked opponent since Georgia as they travel to Vanderbilt on Tuesday. UK defeated the Commodores earlier this season.