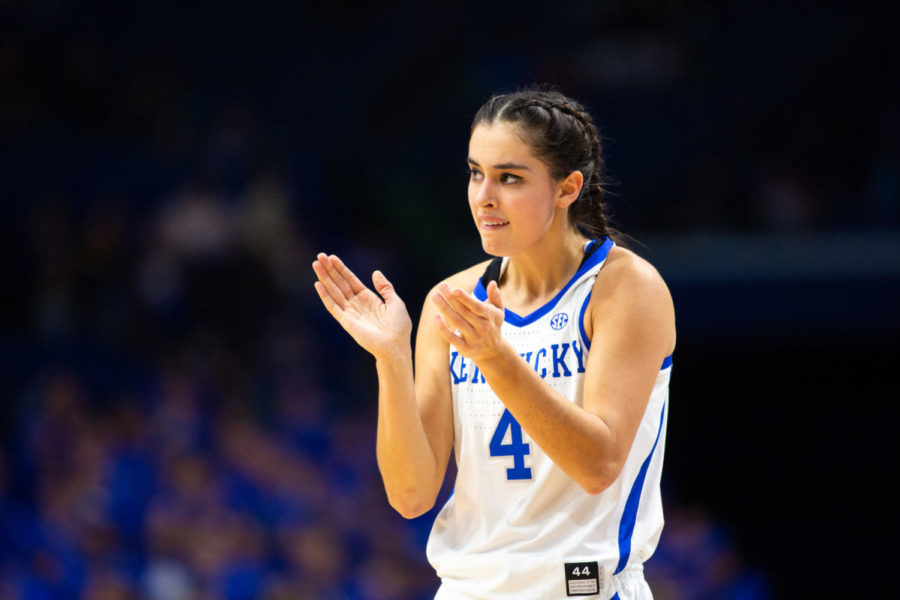 Senior guard Maci Morris claps after a foul is called during the game against Virginia on Thursday, Nov. 15, 2018, at Rupp Arena in Lexington, Kentucky. Kentucky won 63 to 51. Photo by Jordan Prather | Staff

The Kentucky women’s basketball team beat No. 13 Tennessee in Knoxville Thursday evening for only the fourth time in program history. Kentucky is now 15-2 on the year and 2-1 in conference play after winning on the road, 73-71.

The victory over Lady Volunteers is Kentucky’s second top 25 win of the year.

Kentucky led the whole game after starting the night with a 22-5 run. This early lead was in large part due to Maci Morris’ high-scoring night. Morris had 14 points in the first half before foul troubles benched her.

Starting point guard Taylor Murray was only able to play nine minutes for the Wildcats before leaving with knee pain. In those nine minutes, Murray had an assist and nine points, tying her for 22nd on Kentucky’s all-time scoring list.

The Wildcats started the second half strong, stretching their 10-point halftime lead to as many as 15 points.

Tennessee started off a fourth quarter that was almost all downhill for the Wildcats with a 10-2 run.

Rhyne Howard fouled out of the game with seven and a half minutes left to play. In the next three minutes, Tennessee would cut the lead by four.

Morris picked up her fifth and final foul with slightly over four minutes left in the game. Tennessee staged a quick four-point run with UK’s senior leader and freshman star forced to watch from the sideline.

When things began to look scary for the Wildcats, Kentucky looked to senior guard Jaida Roper, who had eight points in the final three and half minutes of play. The most notable of these points came when Tennessee had cut the lead to two points. Roper ran down the shot-clock to barely a second before drilling a deep three with a hand in her face.

Morris ended with 27 points, pushing her up the all-time scoring list in UK history to tenth. She needs eight more points to take 9th place from Sarah Elliot.

Ogechi Anyagaligbo had a career-high 13 points on six of seven shooting off the bench.

The Wildcats’ next game will be against Ole Miss on Sunday, Jan. 13, at Memorial Coliseum. Tipoff is at 1:00 p.m. and the game will be available to watch on the SEC Network.