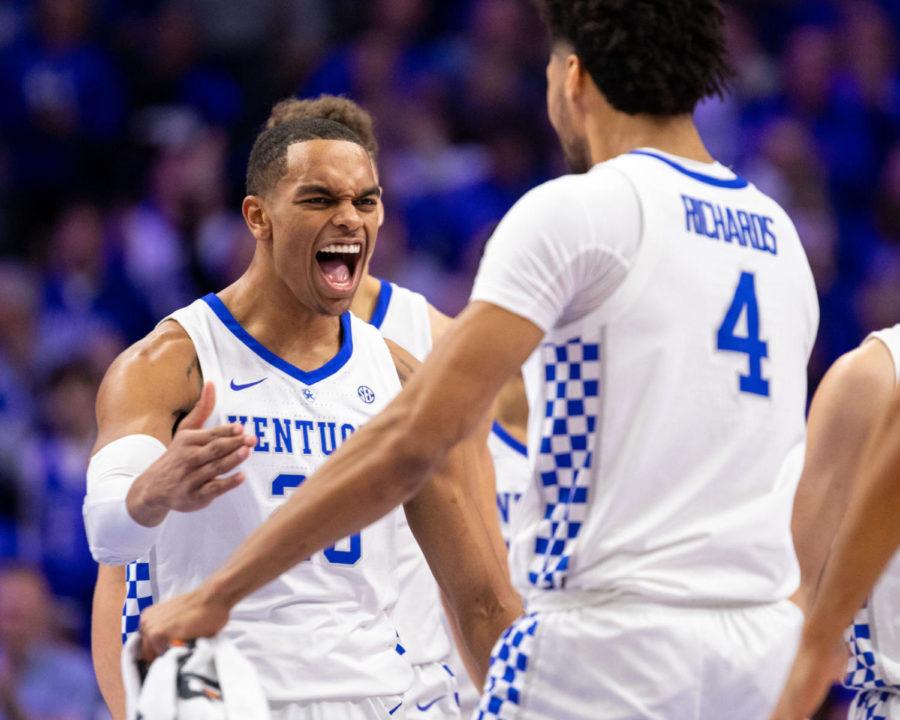 Kentucky sophomores PJ Washington and Nick Richards celebrate during the game against Kansas on Saturday, Jan. 26, 2019, at Rupp Arena in Lexington, Kentucky. Kentucky won with a final score of 71-63. Photo by Jordan Prather | Staff

Kentucky head coach John Calipari had nothing but positive things to say about sophomore forward PJ Washington’s performance against Kansas. Rightfully so—Washington and graduate transfer Reid Travis combined for 38 points and 25 rebounds in the team’s 71-63 win.

In the last two games, the sophomore has filled the stat sheet with a total 41 points, 19 rebounds and four blocks, and with the duo of Washington and Travis on the inside, Kansas 6-foot-9 forward Dedric Lawson had a tiring matchup.

“It’s tough playing against two bigs like that,” Lawson said. “We play a small-ball lineup, so alternating on PJ, Travis, sometimes Nick (Richards), so it’s just something you’ve got to step up to the plate, can’t make any excuses on how to play, you just got to go out there and get it done.”

For Travis, his main focus when going against Lawson was to be physical, and said his coaches told him that he needed to ‘touch him every time he’s on the floor.’

“With him, they run a lot of their offense through him, they’re looking for him a lot. So for me, I was just trying to be physical with him, I was trying to wear him down,” Travis said. “I knew he was going to play a lot of minutes, so just trying to stay active on him a much as possible.”

Washington and Lawson are more than just enemies on the court—they’ve known each other since they’ve been in high school.

“Lawson is a fantastic player, I mean I played with him in high school so I know him pretty well,” Washington said. My mom actually went to high school with his mom, so I’ve known him since I was a kid so he’s just a great player and I’m really excited for him and he’s going to have a great career.”

Lawson says Washington is like a little brother to him, and that he cherishes their moments together on the court.

Calipari wasn’t the only one to think Washington and Reid took over the paint. Kansas head coach Bill Self commented on how tough it was for Lawson to have multiple guys to cover.

“Dedric played well tonight. He played well, he didn’t make a lot of shots, but there’s a reason why he didn’t….” Self said. “You’re going against a fifth-year guy, and PJ is beyond his years physically, and Nick (Richards) is, as well.”

Washington has back-to-back 20-point games for the first time in his career and will have the chance to make it three when the Cats hit the road to Nashville to take on Vanderbilt Tuesday.