Williams selected as the 18th pick by Columbus Crew 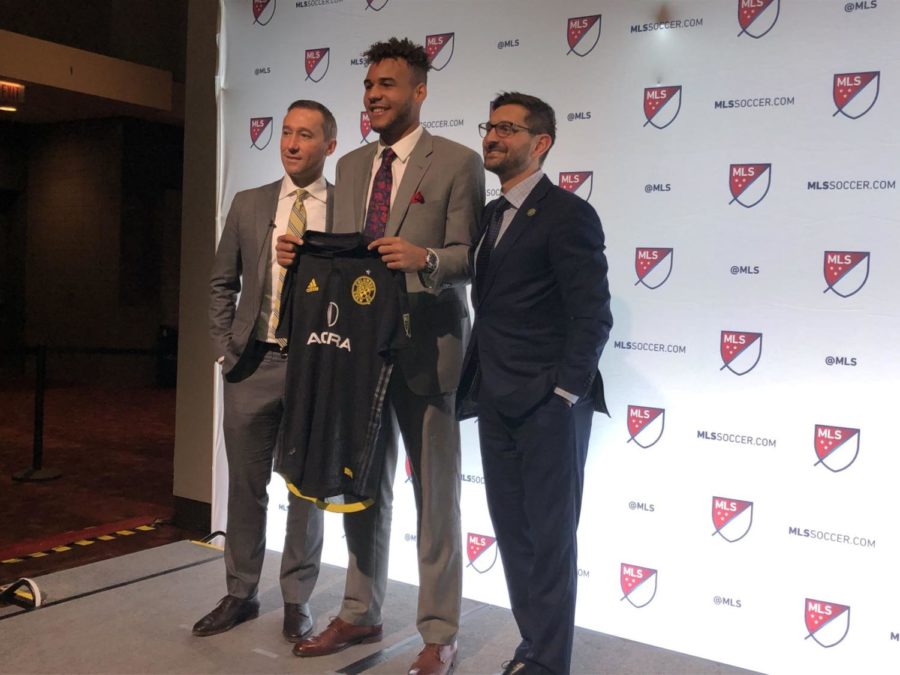 JJ Williams gets selected as the 18th overall pick by the Columbus Crew in the 2019 MLS Super Draft on January 11, 2019.

Former UK star forward J.J Williams added another accomplishment to his bucket list Friday afternoon after being selected 18thoverall by the Columbus Crew in the MLS SuperDraft at the McCormick Place in Chicago.

Williams is the highest-ever selection from UK in the SuperDraft. He is only the second UK player to ever be drafted– Napo Matsoso was selected 31stoverall by the New England Revolution in 2017.

“I’m blessed to be in Columbus and close to Kentucky. I’m going to an amazing club,” Williams said. “I want to make this team something that everyone wants to be a part of.”

“He’s a player we didn’t expect to be available that late. Yeah, we were a little bit surprised,” Bezbatchenko said. “You can’t just necessarily pick players with J.J’s size and profile. He has a lot of things that make players successful in the MLS.”

Columbus Crew head coach Caleb Porter echoed Bezbatchenko, saying that he “didn’t expect” him to be around at that point in the draft. However, his team took advantage of the opportunity.

“He fit a need. We were looking for a guy who could fill depth at the number nine position. It’s great to get a guy that brings something a little different,” Porter said. “I like his energy. He’s a big body and we don’t have that.”

Williams said that he “had nerves” as the draft progressed, but that it was “alright” to have those feelings. He didn’t seem bothered by his draft position.

“That’s not something I was worried about,” Williams said. “One of the most important parts of this process is going somewhere you fit. I’m just thankful for the opportunity and I’m ready to get to work.”

This all comes after Williams’ breakout season in 2018 with UK, which featured the deepest postseason run in team history. Williams was a MAC Hermann Trophy finalist and the C-USA Player of the Year, Offensive MVP and Tournament MVP. He set the UK single-season goals and points records with 18 and 44, respectively.

All of those accolades came, however, after he started only one game in 2017 and played about one-third of the minutes that he played in 2018. He gave credit to his teammates and coaches at UK who helped grow and develop.

“I can’t show enough love to Kentucky for what they have done to me in my college career. I’m extremely thankful for my guys who put me here,” Williams said.

When asked about what he took away from this entire process, Williams had a simple response.