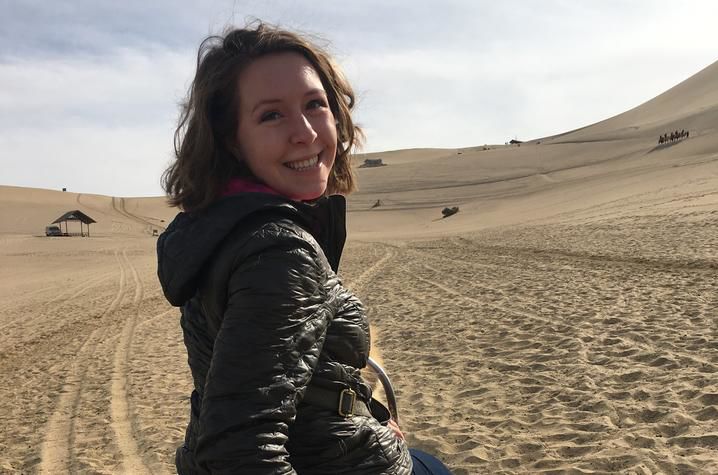 UK graduate Bridget Nicholas was named as one of the 30 Thomas R. Pickering Foreign Affairs Fellows, allowing her to receive funding for her master's degree and five years of work experience as a foreign officer. Photo provided by Bridget Nicholas

Being a high-achieving university with global impact that focuses much of its efforts on cultural enrichment is one of UK’s core values, and it can be reflected in its mission statement and as part of the new Kentucky Can: The 21st Century Campaign.

This university is made up of all its students, faculty, and alumni, and it is up to them to bring this vision to life while achieving their own personal and professional goals.

That is exactly what UK grad Bridget Nicholas has accomplished.

On Dec. 6, 2018, the UK Office of Competitive Awards announced Nicholas, a 2018 modern and classical languages (Chinese studies) and international studies graduate, as one of 30 Thomas R. Pickering Foreign Affairs Fellows. This program will allow Nicolas to receive funding for her master’s degree in a foreign service field and give her the guarantee of five years’ work experience as a foreign officer, either in the nation’s capital or at an international U.S. embassy.

Nicholas acknowledged that the application process was extremely rigorous and extensive, and she said she feels fortunate and honored to be selected to continue to represent Kentucky abroad. She previously interned with the State Department, and her undying interest in Chinese language and culture is what pushed her to apply.

“I have always been drawn to learning about other languages and cultures and have wanted a career where I can travel,” Nicholas said. “I interned in the Taiwan Coordination Office in D.C. and in the Public Affairs section of Embassy Bishkek in Kyrgyzstan. I realized that the Foreign Service offers the perfect way to put what I have learned to work and a constantly challenging career: FSOs change jobs and posts every one to three years, so they’re constantly learning and adapting.”

Prior to being selected as a Pickering Fellow, Nicholas spent time as a Princeton in Asia Fellow, a program that she thoroughly enjoyed, but she missed the bonding experiences with other Fellows. She hopes to enjoy all the benefits of being able to spend time with her new cohort of Fellows before being assigned to a location abroad.

“Fellows and their cohort spend a week at orientation together,” she said. “Then [they] follow the same path — two years of graduate study and internships before entering the Foreign Service together.”

In her time at UK, Nicholas’ professors agreed that she had the character, work ethic and vision that it takes to be a positive change in the country’s future with foreign affairs.

The university has always put an emphasis on international outreach — always pushing kids to study abroad and recruiting new freshmen from international locations. Nicholas said she agrees that the university’s message about going beyond Kentucky is vital for personal growth.

“The world is so big — and it only seems bigger the more I have traveled,” she said. “Kentucky is such a small corner of the world that I think not gaining a perspective on somewhere outside of it, whether through study, travel, language learning, or another method, would be a great pity.”

Nicholas urges everyone to learn more about the world, through whatever means they can. The Pickering Fellowship is a perfect opportunity for she and students with the same dreams as her to be able to make a difference within the community at UK, the commonwealth of Kentucky and beyond to the world’s farthest reaching, untouched corners.