UK student had ‘once in a lifetime’ experience on Family Feud 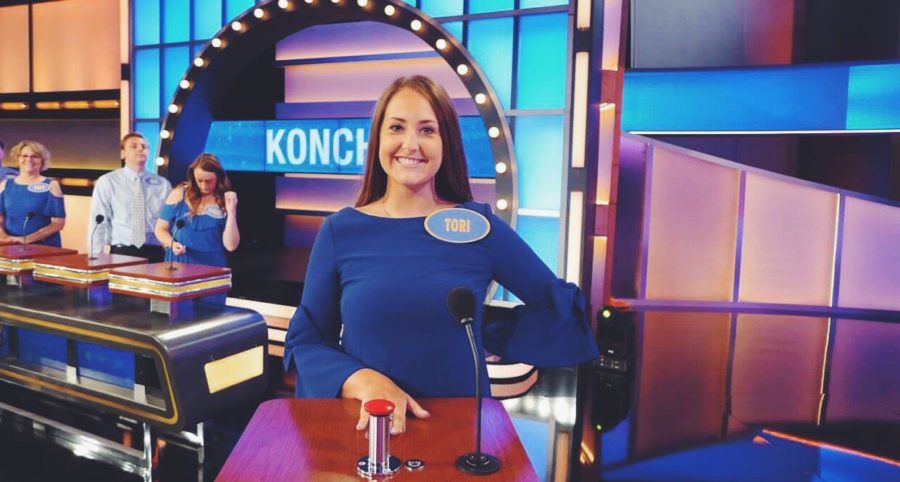 Konchel said her family's time on the game show was a great family experience.

This is what UK student Tori Konchel and her family got to say while playing on the popular game show “Family Feud.”

“Family Feud” puts two families against each other while they try to guess the most popular answers to subjective questions. It takes place over multiple rounds. The first family to reach 300 points goes on to play a “Fast Money” round with the chance of winning $20,000 and a new car.

“Filming the show was not nearly as nerve-racking as I thought it would be. The hardest part was trying to steal. My family would be in the huddle coming up with as many answers as possible, but the hardest part was choosing which one we would say,” Konchel said.

Konchel is a freshman pre-nursing major originally from Bartlett, Illinois. Her mother, father, brother and sister joined her on the fast-paced game show.

“I want to know how she got on the show. That would be so funny to watch my family do that,” said UK junior Amia Akwiwu.

Konchel applied to audition for the show in February 2018 during her senior year in high school. She later received an email that she and her family had gotten the audition. In March 2018, they went to the audition and found out they were going to film for the show about a month later. In June of that same year, Family Feud flew the Konchel family out to Los Angeles to tape the show.

“This experience was once in a lifetime and it was something my family will never forget,” Konchel said.

There wasn’t a strategy for playing the game, she said. Her family prepared for the show by watching current episodes and trying to come up with answers on the spot. Konchel continued by discussing the production crew of “Family Feud” and how they made their experience easy and enjoyable.

“Steve Harvey is even funnier in person and a truly great person. However, filming was not the only fun part,” Konchel said. “For episodes that we were not filming, we sat in the audience. We cheered on the other teams and listened to Steve Harvey’s hilarious jokes. We also rehearsed with the other families each day before filming, where we learned the rules and what to do when it was finally time for your family to film.”

Konchel and her family made it to the “Fast Money” challenge but were unsuccessful on continuing with the game show. Although her family didn’t win, Konchel said this was a memory she and her family will never forget.

“This was such a great way for my entire family to be together before I went off to college. This was one of the most memorable experiences I will have in my life,” Konchel said.

Although the Konchel’s episode already aired, “Family Feud” airs at 7:30 p.m. on the CW Lexington.