‘Never give up,’ football players who broke color barrier say 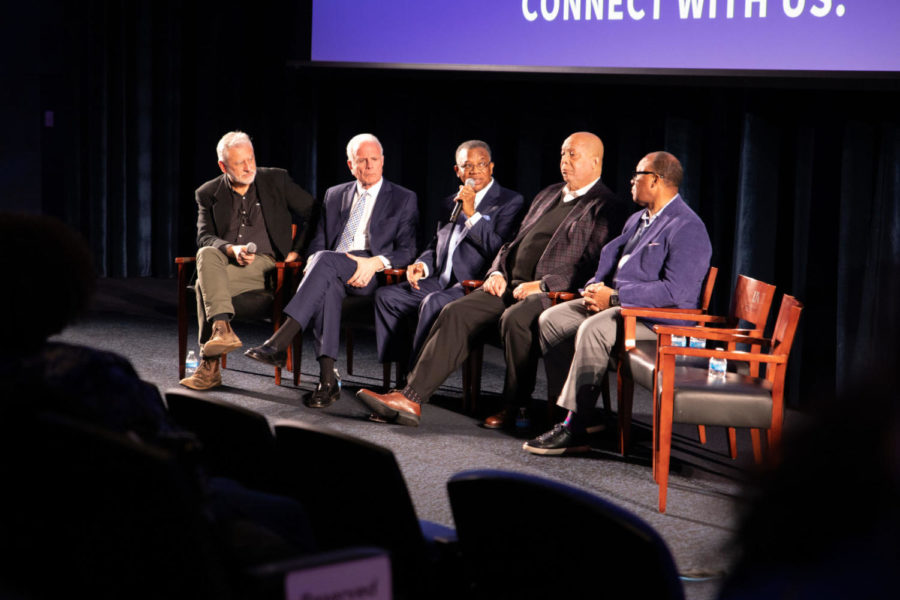 Paul Wagner, Paul Karen, Nate Northington, Mel Page, and Wilbur Hackett (left to right) participate in a panel Q&A after a viewing of the documentary "Black in Blue" at the Worsham Cinema in the Gatton Student Center on Feb. 21, 2019 in Lexington, Kentucky. Photo by Michael Clubb | Staff

Thursday night’s showing of the documentary “Black in Blue” brought more than entertainment to Worsham Cinema.

The film, produced by UK alums Paul Wagner and Paul Karem, tells the story of the four UK football players who broke the color barrier in the SEC.

Panel topics ranged from topics of legacy, family and healing to the state of athletics and civil rights today.

Northington and Hackett reiterated the idea that their goal at the time was to just to play.

“We loved playing football, we loved the game, and that’s what we wanted to do. That’s what it was all about,” said Northington, adding that integration was secondary. “We knew we were making history, but it wasn’t the foremost thing in our mind.”

“All I wanted to do was to get an education and play football.The historical aspects of it never really crossed my mind,” Hackett said. “I was too busy trying to survive.”

The societal consequences of these players’ actions wouldn’t have been possible without the sport itself.

“The vehicle that made this happen was football,” said Karem, who played under UK Coach Charlie Bradshaw with Hackett and Houston Hogg. Football, which was and still is almost a religion in the SEC, was a ready-made platform for change—and remains to this day a platform for civil rights.

“We got a long ways to go yet but we can see that we’re able to make change and sports has a way of doing that,” Northington said.

“It’s going to take everyone in this room, as integrated as it is, to do their part to make sure that change continues to happen,” Hackett said.

Hackett, who would become the first black team captain in the SEC and later an SEC official, also spoke about changes in football.

“I see how enormous this game has become and I honestly, with the way football has transformed from being a sport to a business, I think these players deserved to be paid,” said Hackett, answered with applause from the audience.

Sydney Banks, Director of Engaging Issues for SAB and the coordinator of the event, said she wants “students to understand that overcoming adversity has always been a problem that everyone will face.”

“I hope this event has taught them to believe in their strength,” Banks continued.

Hackett and Northington share that hope. In the final question of the night, Walker asked what advice these pioneers would give to the next generation.