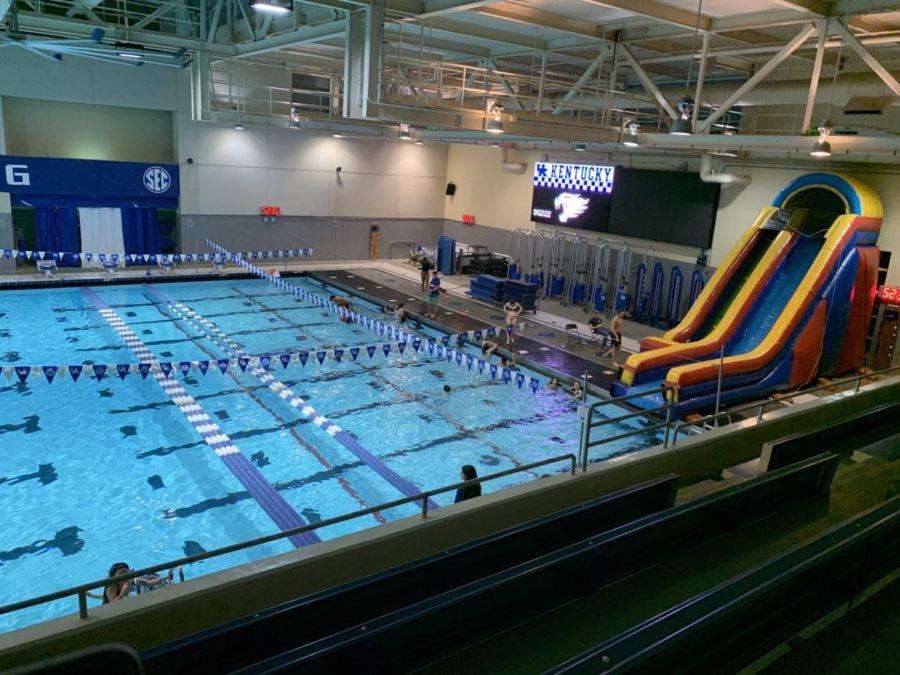 Splash Bash provided a number of activities for students at the Lancaster Aquatic Center.

Pool parties aren’t just for the summer. Even as temperatures dropped into the low 30s with the threat of snow, UK students were diving into the indoor water activities of Splash Bash at the Lancaster Aquatics Center on Friday night.

Students arriving for the party swiped in and signed a waiver, and once changed were directed to complete a swim test to ensure their safety before the pool fun could begin. Activities provided included two paddle boards, two large inflated rafts— both taking up about a third of the pool in a shared free swim area, with the floats free to roam — mid- and lower-level diving boards and platforms, a variety of beach balls and water toys and guns, and a giant inflatable water slide shooting right out into the water.

Free swim and the various activities of the event were taken full advantage of by students. Many broke off into groups and played large games of tag with water guns or raced each other in the open pool areas, or even dared one another to jump off of the diving boards.

“Everybody’s pretty comfortable,” said Maggie Kurran, a freshman history major who attended the event with a group of friends. “I haven’t been swimming since I went to the beach … They did a good job putting this together.”

The night wasn’t just about having fun in the pool in the middle of winter though. Splash Bash, a new event hosted by SAB and the Lancaster Aquatic Center, was also hosted in part with Campus Recreation and Wellness in order to include a focus on health, fitness and self-worth.

Rachel Reynolds, a sophomore human health sciences major who holds a position with Campus Recreation and Wellness, was there with a group of interns from the Campus Recreation and Wellness to spread awareness of body positivity and health. The group managed a table upstairs in the bleachers, where students came to relax or rest. The table was partly a piece of “Love Your Selfie,” an ongoing campus event encouraging body positivity and fitness in a world dominated by social media, and partly a table of healthy snacks. Rachel and interns Sebastian Masterson, Brooke Kincer and Jordan Baines emphasized the event’s and their own focus on “promoting wellness.”

Though mostly focused on giving students an opportunity to swim for fun, White said that early in the event’s conception process, she thought there should be an element of body positivity incorporated in the event’s theme. While many attendees wore Hawaiian shirts and leis, one could also see a wide variety in swimsuits.

White said that though she is not involved with LAC or the Johnson Center, she likes swimming and feels like most UK students don’t get much of a chance to swim for fun, and she wanted to do something about it.

“We wanted to do something like that for all UK students,” she said.

When coming up with the night’s more adventurous activities, White said that the large floats (shaped like a pink flamingo and a mechanical bull) and water toys were provided by SAB. Paddle boards and a large mat cylinder used, among other things, for log-running were some of the pool’s contributions, as well as a full rotation of lifeguard staff and access to the lower and mid level diving boards. White said the giant inflatable slide was somewhat of a collaboration. SAB had suggested a slide and was told that LAC hosts a very similar event to Splash Bash for varsity swim team recruitment and knew of a slide they could use. The varsity recruitment event is, of course, exclusive, and this was another influencing factor in the inspiration for Splash Bash, said White.

Splash Bash is one event that White hopes will repeat, and it’s easy to believe that the event’s participating students agree with her.