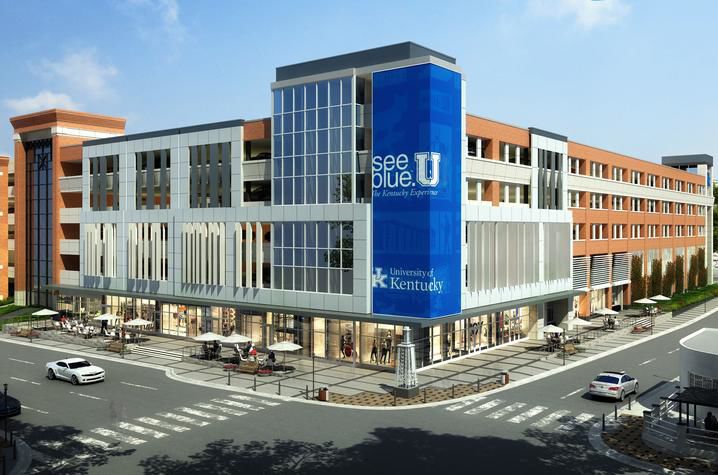 A rendering of the future parking and retail space that is to occupy the space that was once Kennedy's Bookstore. | Photo provided by UKNOW

Kennedy’s Bookstore, once located on the corner of South Limestone and Winslow Street, will now become an opportunity for UK to expand parking and add space for retail.

UK announced its plans for the space Friday. According to a UK press release, the property will be used to “re-imagine a critical piece of property to establish an innovation corridor and significantly expand parking for the campus.”

Demolition of the former bookstore is set to begin in March, according to UK’s Executive Vice President for Finance and Administration Eric Monday. The plans were announced in a Board of Trustees meeting Friday morning.

“We have a vision to transform this critical entrance to our campus and transform it into a hub for innovation as well as further serving the needs of our students, faculty and staff,” Monday told UKPR.

Kennedy’s closed on Dec. 22, 2017, after being in operation for more than 60 years. In April 2017, the store was sold to Core Campus Investment Partners.

The new space is expected to be a six-floor facility. The current South Limestone garage, located to the left of the property, is also six floors, matching the height of the new garage. The new garage will have over 900 new parking spaces.

The press release also said that the ground floor will be a space for retail, “which could include a restaurant and bar.” They also announced that it will include new UK office spaces and an “innovation space that could house an app development technology partnership and/or an e-sports initiative and program for students.”

Construction of the garage is expected to be finished in August of 2020.