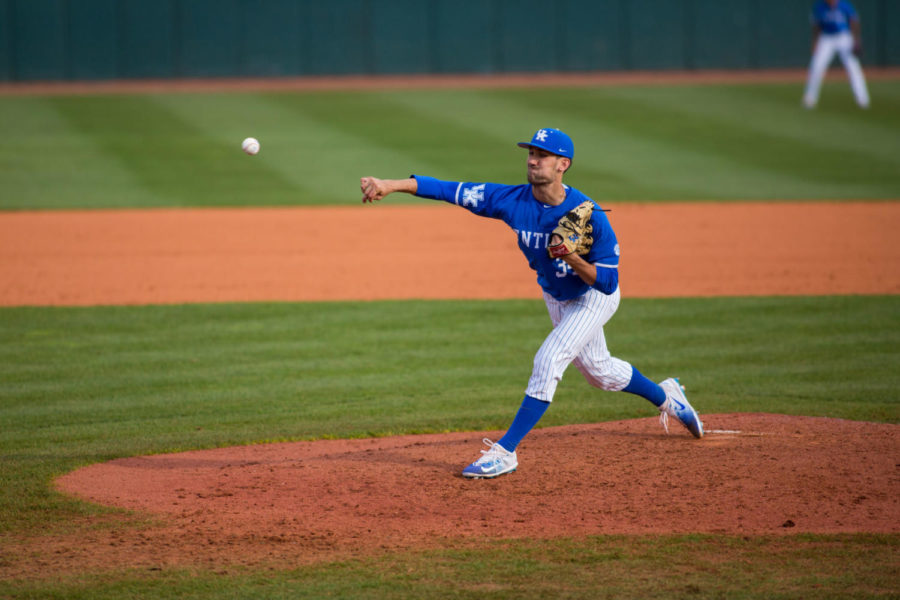 University of Kentucky freshman Carson Coleman pitches during the game against Louisville on Tuesday, April 3, 2018 in Lexington, Ky. Photo by Jordan Prather | Staff

The Kentucky Wildcats and the Eastern Kentucky Colonels baseball teams are set to play in the new Kentucky Proud Park for the first time this season. The Wildcats are hoping to bounce back after a loss against Texas Tech. Their record stands at 3-3.

Kentucky leads the series 42-20-1 against the Colonels and has also won the last two meetings between the teams.

The Wildcats will need to watch out for Eastern Kentucky’s first baseman Will Johnson as he hit .412 with three home runs, eight RBIs, and seven runs scored. He leads the Ohio Valley Conference in stolen bases (8), RBIs (12), walks (12), total bases (25) and is tied for homeruns with 4.

With his outstanding performance, he was awarded Ohio Valley Conference player of the week. Another threat on Eastern Kentucky’s roster is Nick Howie, outfielder leads the Ohio Valley Conference with a .481 batting average, 13 hits, and places 2nd with a .611 on-base percentage. Eastern Kentucky stands with a record of 6-2, their best season since 2014.

The Wildcats are hoping to respond with Ryan Shinn, who leads the team with a .474 batting average and has seven runs scored this season. Juniors, Jaren Shelby and T.J Collett are both tied leading the team with 8 RBI’s individually. Wildcats junior pitcher Zack Thompson was named a Preseason First-Team All-American. He ranks in the top 12 of all active pitchers with at least 75.0 innings in both strikeouts per nine innings, ranking him tenth nationally. He also ranks in the top 12 in hits allowed per nine innings chart. These stats are both currently the best career marks among all of the active SEC pitchers. He currently sits second on Kentucky’s all-time hits allowed per nine innings chart.

The Wildcats are scheduled to begin at 4 p.m. at Kentucky Proud Park. The game will be broadcast on SEC Network Plus.