Herro’s rebounds a key in Kentucky’s win over Tennessee 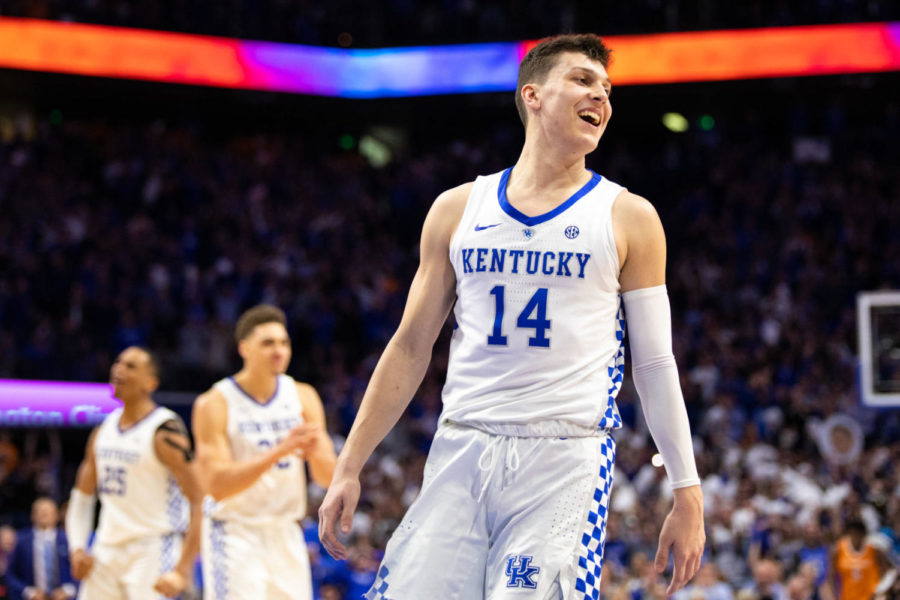 The No. 5 Kentucky basketball team upset conference rival and Associated Press No. 1 Tennessee on Saturday, Feb. 16, 86-69. The Cats managed to grow out of the second-half slump that forced them to lose in the previous game against LSU and nearly blow leads against other opponents.

The Cats imposed their will in order to bounce back and upset the top-ranked team. One of the best players for Kentucky in the win was freshman guard Tyler Herro, who notched a career high in rebounds at 13 and scored double-digit points at 15.

“I thought Tyler Herro, double-double, 13 rebounds,” head coach John Calipari said. “He was fighting for balls…it was a good effort.”

This marked Herro’s first double-double in his college career. Kentucky basketball is 12-0 whenever Herro scores at least 15 points, suggesting that he is a key for the team’s offense in matchups.

“You just have to fight,” Herro said about his mindset that scored him the double-double. “You have to be tough, and learn your style, and get your rebound.”

Herro has been a leader in scoring in several games this season, but this is the first time he’s led in rebounds. Since coming to Kentucky, he has grown into a well-rounded player who is capable of more than just making baskets. In the game against Tennessee, he made that especially evident.

“I was happy for Tyler today. This is a big game for Tyler,” Calipari said. “Forget about baskets made and shots. It was a big game. He got 13 rebounds.”

The area where Herro faltered was in his free-throws, as he missed the first one after making 30 consecutive shots at the foul line. His career shooting percentage dropped to 91.4 at the line and it was 88.9 against Tennessee. Still, he feels that his role in tonight’s win was crucial.

“I’m a rebounder,” Herro said. “Coach just emphasized that we need to get in the rebound category tonight because they are really big down low. So, I just tried to rebound the best that I could.”

Calipari emphasized that the key for Herro’s was to continue to try. The numbers worked themselves out after Herro kept his attempts continuous.

“We keep attempts, focus– at the end of every game that’s the first thing I look at is what were their attempts,” Calipari said. “if you don’t attempt to rebound, you’re not going to get the rebound…so we’re charting attempts to get guys to make an effort to go get– sometimes it just bounces to you. I just know at the end of the game they should all be– on defense it should be a hundred percent.”

As Herro continues to rebound, the Cats will continue to have a good chance to win.