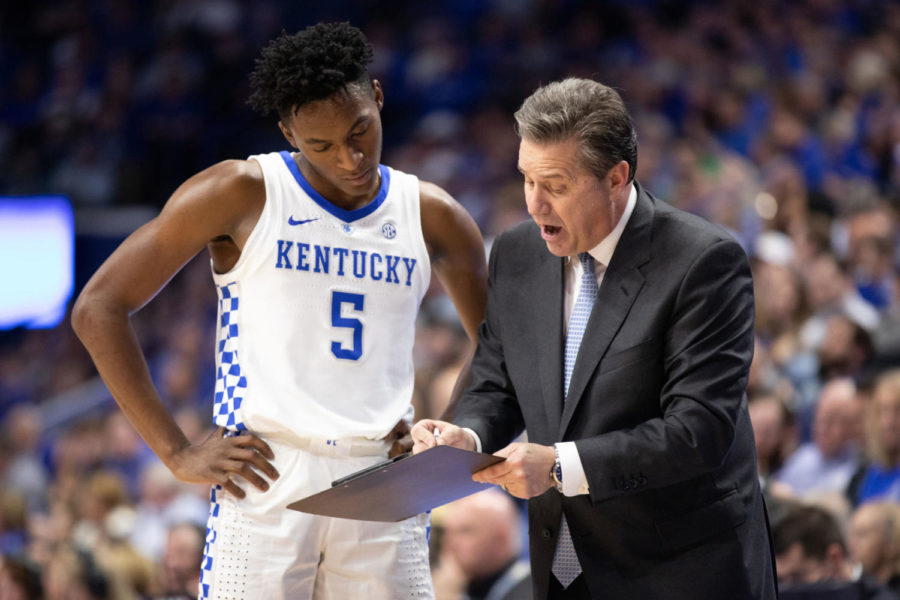 Coming off a hard-fought win at Mississippi State, the no. 5 ranked Kentucky men’s basketball team is on a 10-game win streak and will look to make it 11 Tuesday night as they square up with the no. 21 ranked Louisiana State Tigers.

It won’t be an easy task– while Kentucky is 11-2 against LSU under Coach John Calipari, this will be a tough matchup for the Cats. The Tigers and the Cats, each with a single conference loss, are tied for second in the highly competitive SEC.

While Kentucky was fending off the Bulldogs on Saturday, LSU was fighting their own battle with Auburn. Led by sophomore Tremont Waters and freshman Naz Reid, the Tigers mustered an impressive comeback against Bruce Pearl’s Tigers on Saturday, where they trailed by as many as 16 points.

The Tigers have been dominating SEC play, sitting at third the conference in points, fourth in rebounds and first in steals per game. While they often start sluggish, the Tiger’s offense is one of the most explosive in the country, averaging nearly 84 points per game. The Cats are currently averaging 79.

Freshman forward and 2018 McDonald’s All-American Naz Reid has been a key part of the Tiger’s success, averaging 14 points and 6 rebounds per game. Sophomore guard Tremont Waters, who had an offer from Kentucky, has also been highly productive. A member of the 2019 preseason All-SEC first team, Waters averages 16 points, 6 assists, and 3 steals per game.

For Kentucky, sophomore forward PJ Washington has been in the headlines lately for his phenomenal play, finishing the Mississippi State game with 23 points. Head coach John Calipari, however, knows Washington’s potential and was not so impressed with his performance in Starkville.

“I think PJ is the best player in the country, but not like he played today,” Calipari said. “He doesn’t go get rebounds. He doesn’t get loose balls. He missed one-footers, missed free throws. If you’re the best, play that way.”

Freshman Tyler Herro will also be an important factor in Tuesday night’s matchup. Herro, who averages nearly 14 points per game, is known for hitting big shots in tight games. He drilled an off-balance three-pointer in the final minutes of the Mississippi State game, giving the Wildcats some breathing room.

The UK/LSU match-up will air on ESPN with tipoff set for 7:00 p.m in Rupp Arena.