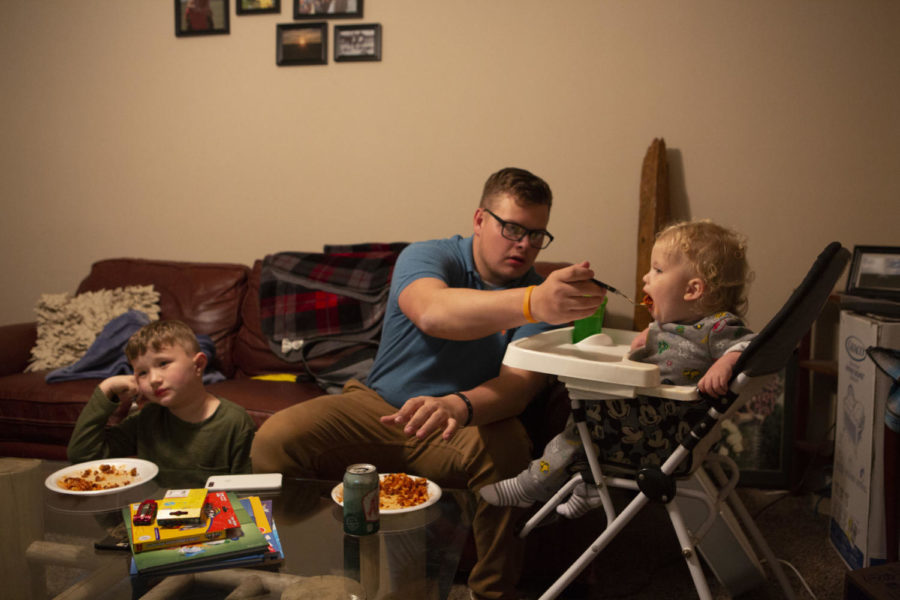 Jordon, Braxton and Brantley sit and eat a dinner of lasagna in the living room of Jordon's apartment. "Before, even though this is my apartment, it felt more just like a place where I laid my head, and then I would just get up and go," Jordon says. "Now it feels more like a home. I enjoy coming home and spending time with them and investing in them."

Jordon Wade contemplates his future with longtime girlfriend, Makenzie Shrout. He said he thinks about raising a family and plans to have children.

What he did not consider was being a parent at 21, and he especially did not plan to become a father of two overnight.

Jordon became legal guardian to his two young nephews, Braxton Mullett, 7, and Brantley Blackburn, 22 months, when his older sister was arrested for not appearing at a court hearing and sequentially failing a drug test.

A social worker told Jordon that if he did not take the boys, they would be sent to foster care.

“I kinda expected it,” he said. “I didn’t expect them to call me, but I did expect the social workers to take them eventually.”

Drug abuse and depression run in Jordon’s family, he said. After high school, Jordon said went through a stage of depression and contemplated suicide, but didn’t want his family to deal with the aftermath, so he began looking for a way to “do it” where no one could suggest it was intentional.

He decided on a car accident.

One night, he was driving a car with his friend and lost control, leaving the front of his car in a ditch and the tail end sticking out into the road. A logging truck came barreling around the curve, barely missing the back of Jordon’s car.

“It was like God flicked me in the forehead – like a clear revelation,” he said. “Like, ‘If you want to die, and this what you’re intending, in a car accident like this, this is how fast it can be taken away from you. … You have to value this life I’ve given you.’”

Jordon said he has devoted his life to glorifying God and sharing his testimony, hoping he can inspire others.

He balances being a father along with being a youth minister and intern at First Baptist Church in Mt. Sterling. He’s particularly proud of Braxton, whom Jordon notes has recently developed a relationship with God and will be baptized soon. Braxton’s performance in school has also improved as well, Jordon said.

“I hope he understands you don’t have to live the way that they lived,” Jordon said, regarding his nephews’ parents. “You can have something, you can have a home, you can be able to help others and make that difference in life.”