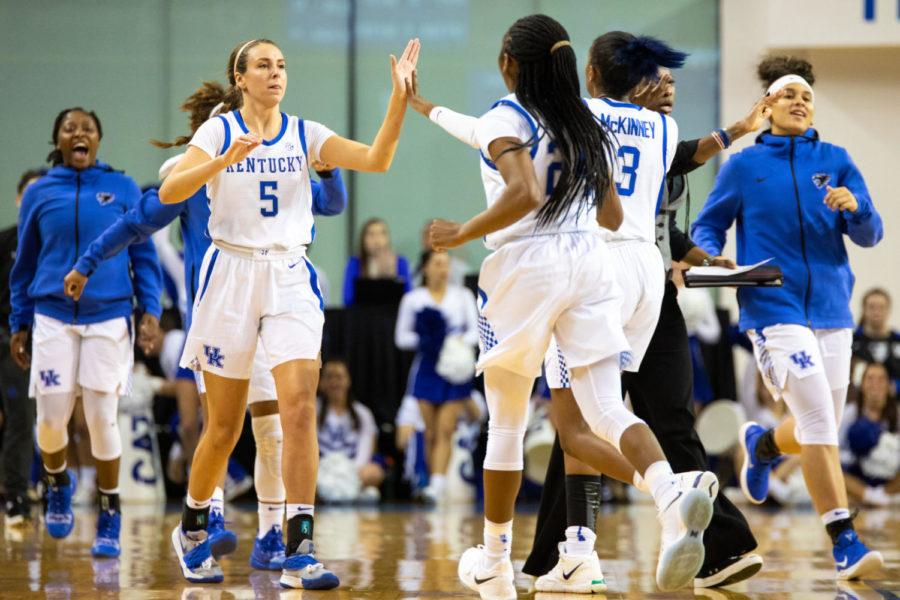 Freshman guard Blair Green high-fives Senior guard Taylor Murray during a timeout in the game against Vanderbilt on Thursday, Jan. 3, 2019, at Memorial Colliseum in Lexington, Kentucky. Kentucky won with a final score of 77-55. Photo by Jordan Prather | Staff

The Kentucky Wildcats women’s basketball team beat the Arkansas Razorbacks 61-59 in a nail-biter in their Play4Kay Game, which was dedicated to former NC State coach Kay Yow, who died of breast cancer in 2009.

“It’s outstanding that on this day we can bring awareness to it (breast cancer) and raise some money and never let Coach Yow down on this charge she gave us,” UK head coach Matthew Mitchell said.

Just one minute and 45 seconds into the game, senior Maci Morris passed Pam Browning on Kentucky’s all-time scoring rankings. Later in the game she also passed Samantha Mahoney for sixth place on the Wildcats’ scoring list. Morris said that she was thankful to have broken Browning and Mahoney’s records but didn’t take the credit for it.

“I couldn’t do it without my teammates and stuff. They’ve helped me all four years,” Morris said.

While Morris was breaking records, the Razorbacks kept the game close. Kentucky launched a four-point run with 6:11 remaining in the first to take a 13-8 lead. Arkansas kept the game within five points until the final minute of the quarter. Kentucky ended on a five-point run highlighted by a Rhyne Howard three-pointer to take a 22-14 lead into the second.

The Wildcats looked like a different team in the second quarter as they made just two of their 16 shots. Arkansas took advantage of Kentucky’s struggles with a 10-point run to steal the lead with 4:27 remaining and were able to retain the lead and exit the half with a 33-30 lead over the no. 17 Wildcats.

“It all starts on the defensive end,” Taylor Murray said when asked about overcoming an offensive struggle like the team had in the second quarter. “When you have droughts like that you just have to keep communicating with each other.”

The third quarter featured a fast-paced punch-out between two determined teams. The first seven baskets of the quarter came from inside the paint with more than a little bit of contact. Kentucky’s defense earned them two vital fast break baskets in a 7-2 run that gave them a 43-41 lead with just under four minutes remaining. The run capped off by a KeKe McKinney block, then a Howard steal and finally a Blair Green fast-break layup. Arkansas scored the next basket off a Green turnover, but the Wildcats answered with a four-point run. The Razorbacks made a three-pointer with eight seconds left to cut the lead to 47-46 entering the final quarter of play.

Arkansas fought right down to the wire– a five-point run tied the game with just under five-and-a-half minutes remaining. Kentucky was able to push its lead back up to four with five straight trips to the free throw line, but only made six of their 10 free throws. Arkansas made a free throw with 55 seconds left to cut the lead to just three. Kentucky missed four straight free throws, then Raven Northcross-Baker drilled a three-pointer to tie the game with 22 seconds left.

Kentucky put the ball in the hands of their star freshman Rhyne Howard and she did not disappoint her teammates. Howard crossed her defender and swished a mid-range shot to take a 61-59 lead with three seconds remaining. Howard stole the ball with the final seconds winding down to seal the game for the Wildcats.

“The play of the game is not the basket,” Arkansas’ head coach Mike Neighbors said. “She made a tremendous play to steal that ball.”

On top of a game-winning basket and steal, Howard led Kentucky in all five major stats: points, rebounds, assists, steals and blocks. Howard is now the second player on the team to do this after Murray led in all statistics last year against Florida. Howard scored 18 points, rebounded the ball 14 times, had four assists, stole the ball three times and blocked one shot.

Howard’s play impressed coach Neighbors, even though he had high expectations of her before the game.

“She had my vote for freshman of the year a long time ago,” he said. Neighbors went on to say that Howard has been dominating SEC in a way that he can’t remember the last time he saw. “She’d be the kid I pick up in a pick-up game,” Neighbors joked.

The Wildcats’ next game will be against the South Carolina Gamecocks on Thursday, Feb. 21. This will be the teams’ second meeting of the year– the Gamecocks won 74-70 at Memorial Coliseum on Jan. 31. Tip-off is scheduled for 7:00 p.m. in Columbia, South Carolina, and will be televised by the SEC Network.