Herro paves the way for a comeback win over Arkansas 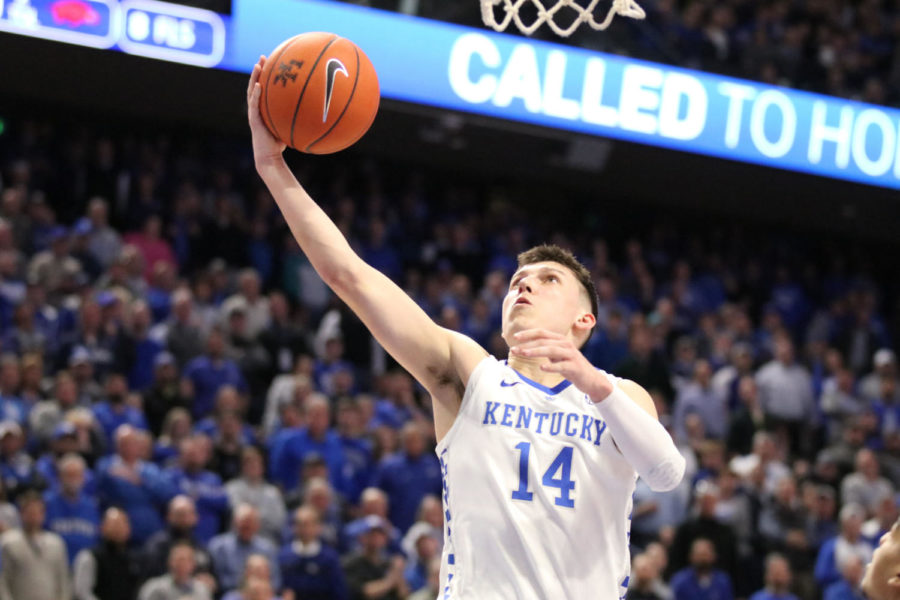 If any night warrants corny, overused jokes about Tyler Herro being a hero, tonight’s the one.

In Kentucky’s 70-66 comeback win over the Arkansas Razorbacks, Herro totaled a career-high 29 points, his most since scoring 24 against Louisville in December. The freshman went from 9-of-10 from the field, 5-of-6 from the three, 6-of-6 from the free throw line, and also recorded four rebounds, three assists, two steals and a block.

Kentucky trailed for much of the game, by a wide margin, until the Cats clawed their way back in the second half due large in part to Herro. In about a seven-minute span starting at the 14:17 mark in the second half, Herro led a comeback after being down by 12 by filling the stat sheet with 11 points, two rebounds, two assists and one steal in that time span.

Despite his highly efficient scoring night, Kentucky head coach John Calipari took issue with the freshman’s defense in the first half.

“Well, you do know he gave up like 25 points today. In threes. He gave up like the first 11…” Calipari said post-game. “I walked out, I said I can’t, we can’t win if you’re getting scored on every time. He said, well, let somebody else guard the guy. That’s okay. Then you’ll come out.”

Rather than taking himself out of the game, Herro tightened up his defense in the second half.

“He was on me for my defense but I thought I played pretty well,” Herro said.

Being down by as many as 15 to an unranked team, it started to feel as if the Razorbacks may have been overlooked by the Cats before tip-off. But Herro says otherwise.

“I think we just got off to a slow start,” Herro said. “They were just playing harder than we were and I feel like they wanted it more in the first half but we picked back up in the second.”

Filled with swagger and intensity as his shots started falling in just the right moments in the second half, Herro credits his freshman counterpart Keldon Johnson, saying the energy they share and feed off of each other always helps.

“He brings a lot of energy to us every day in practice and it’s good to have a guy like that who brings energy and gets everybody going,” Herro said.

Johnson had himself a laugh when asked about how much him and Herro feed off of each other in high intensity games.

In an attempt to slow Kentucky’s momentum and get the ball back with enough time to get a shot off, Arkansas fouled Herro and sent him to the free throw line. According to Herro, Arkansas’ Mason Jones told him to miss a shot for him, in which Herro responded “I’m a bucket.” Even the freshman himself doesn’t know what that exactly means, but he said Jones responded by saying he knew Herro would make both shots.