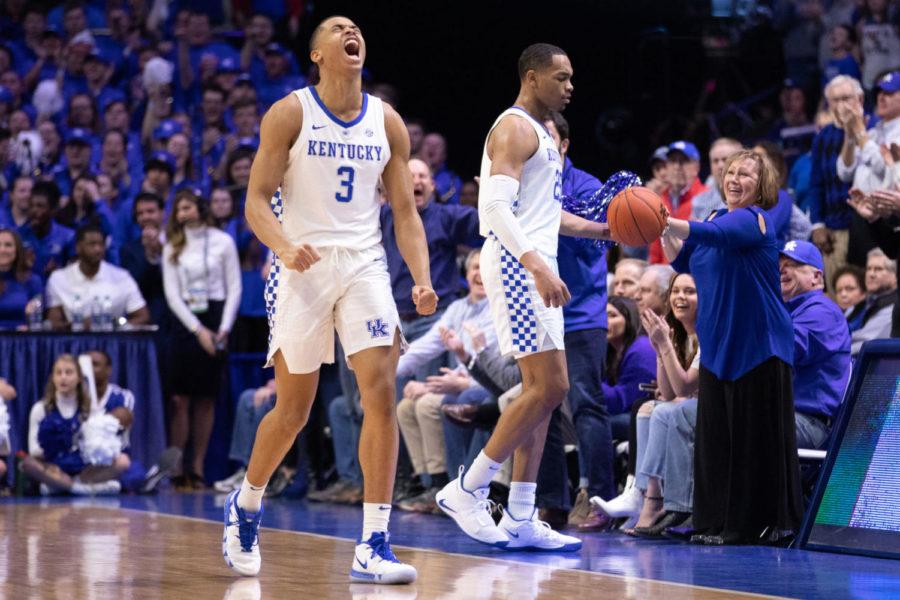 The Kentucky Wildcats made a road trip to Gainesville, Florida to take on the Gators in the first of two times the teams will meet this season—the Wildcats coming out on top 65-54 in what was a back-and-forth contest for much of the game.

Florida took an early 7-2 lead over the Cats after a Noah Locke three-pointer and two points in the paint from Andrew Nembhard. Kentucky freshman Tyler Herro responded with a three-pointer of his own with an assist from teammate Ashton Hagans, cutting UF’s lead down to two. A dunk from Reid Travis tied up the game at seven, but an even score would be the closest the Cats would be to taking the lead until five minutes left to go in the first half.

Herro made the most impact for the Cats in the first half, reaching ten points around halfway through with his second three-pointer. The freshman went 4-of-4 from the field and 2-of-2 from the three in the first 20 minutes.

A Keldon Johnson board and Hagans assist led to a PJ Washington dunk in the post to give Kentucky its first lead of the half, 20-19. A tip-in by Keyontae Johnson gave Florida back their lead, but Wildcat Jemarl Baker, who had just entered the game, sank a three. In a back-and-forth battle, Florida spotted a 24-22 lead with a three-piece, and the Cats wouldn’t come back for the remainder of the half.

Heading into the locker room, the Gators were ahead 33-29, with Herro as Kentucky’s leading scorer with 10 points. Washington was right behind with eight points and a leading six rebounds.

Seven minutes into the second half, the Gators took a 42-31 lead due to a 9-0 run and a six-minute Kentucky scoring drought. Kentucky didn’t back down, though, and slowly cut UF’s lead down with a 14-0 run over about a seven-minute span. As Kentucky battled back, they regained the lead with 4:53 left in the game thanks to a Johnson three-pointer.

The Wildcats finalized their comeback and wouldn’t turn back from being ahead, giving them their 18th win of the season.

Herro was UK’s leading scoring with 19 and six rebounds, while Washington recorded another double-double with 15 points and 12 rebounds.

Kentucky returns to the court on Tuesday at home against South Carolina.