Why the Cats are contenders… for real this time 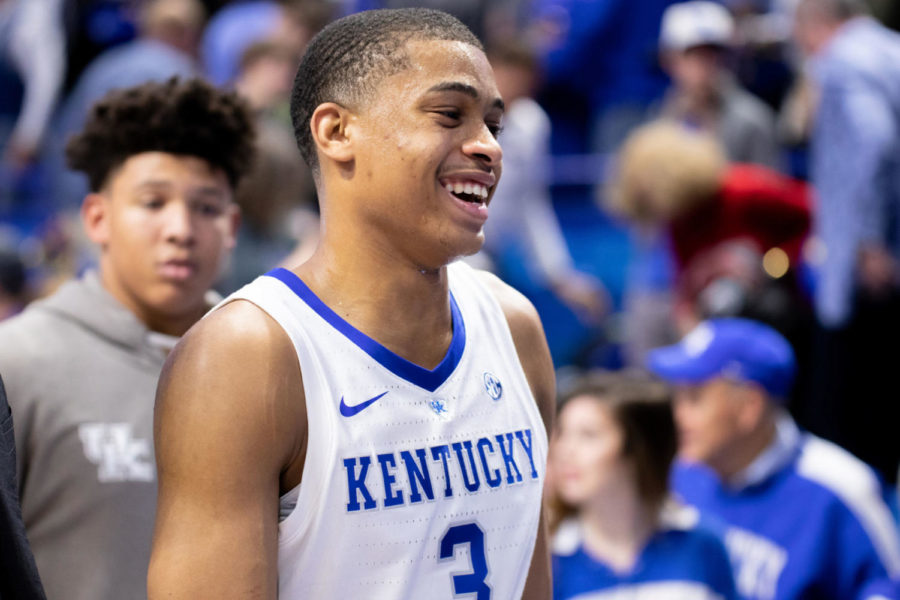 The UK men’s basketball team’s win over Florida on Saturday is the most important win this year.

Yes, the Cats beat Vanderbilt by 35.

Yes, the Cats were only scared by a Bryce Brown hot streak in Auburn.

But if the Cats end up winning a national title, an 11-point win against a 12-8 Florida team will be the reason.

On the road, everything gets a little more difficult. Shots are harder to knock down. The crowd’s momentum can’t be used for leverage or intimidation. Most of basketball fandom knows this (I always have to say “most” because, you know, Twitter).

That’s all well and good, and wins on the road aren’t uncommon. Kentucky has several of them in their now eight-game winning streak. Not many of them have been particularly close. Even if one were to check the final score of Saturday’s game, they would also believe it was not close, unless they’re one of those people that looks at a 15-point game like “yeah, they were right in that one.”

The reason this game would be the cause, or the telling sign, of a national title is just how poorly they played.

Seriously, for the first 27 minutes of the game, UK couldn’t throw a rock in the ocean. Full credit to Florida’s (very overmatched) defense for handling the Cats’ size as they disrupted plays and caused turnovers, but the visitors really couldn’t make a shot for anything.

They also weren’t hustling to any loose balls, which was the primary reason for many of their 12 turnovers. Ashton Hagans threw bad passes, P.J. Washington got stripped trying to post up and the Cats were generally just getting manhandled on the road.

It looked pretty hopeless, too. The Gators led by 11 with 12:33 left in the game, and somehow the script flipped so drastically that the Cats ran away with an 11-point victory themselves. All they did was make shots and pull down a couple high-energy rebounds. Keldon Johnson shot only 4-13 and made some of the most important offensive plays down the stretch.

The reason this makes for a national championship team is that it was 12 minutes of good basketball. Twelve minutes of intense defense, good rebounding and above-average shooting forced a 22-point swing in one of the most hostile environments in the SEC. With this win, John Calipari takes only his fifth victory in 10 tries in Gainesville.

If a basketball team is playing one of its worst games of the season, and still finds a way to dominate by playing a quarter of the game well, they’ve got a serious contender on their hands.

In last year’s NCAA Tournament, the offense died against Kansas State, leading to elimination. In 2016, it collapsed because Jamal Murray couldn’t sink a shot against Yogi Ferrell’s Indiana Hoosiers.

This year’s Cats don’t have that concern, because they can put most teams out of commission in 10 minutes. That’s a quality and a luxury not afforded most teams, and it wasn’t clear to be true until their trip to Gainesville.

Kentucky’s on fire right now, even if there’s a game when they’re not.