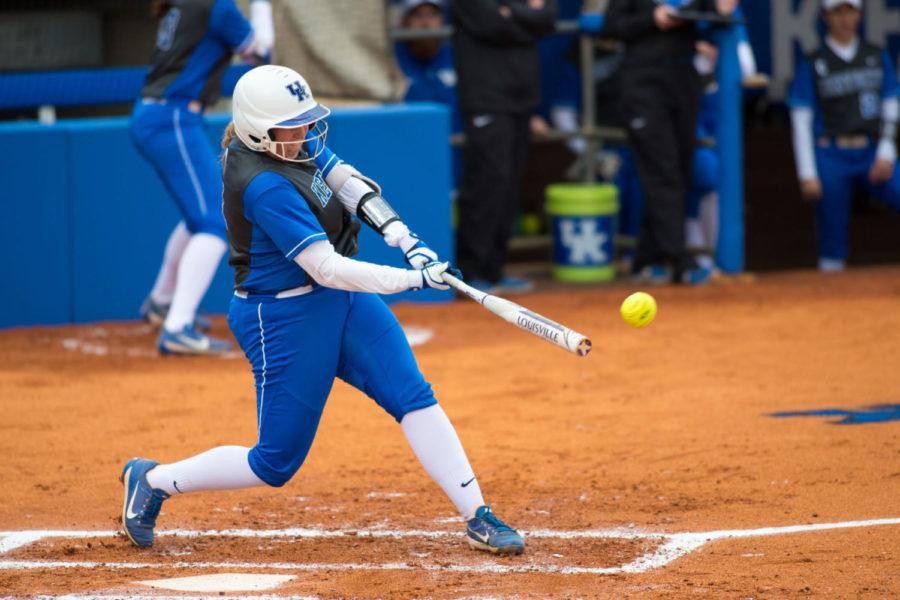 University of Kentucky junior Abbey Cheek hits a pitch during the home opener against the University of Dayton on Thursday, March 1, 2018 in Lexington, Ky. Photo by Jordan Prather | Staff

Kentucky softball head coach Rachel Lawson didn’t have a media day in her first season at UK over 11 years ago.

On Feb. 5, the room was filled with reporters and cameras fixated on Lawson for this season’s media day.

Lawson addressed her appreciation for the media in her opening statement.

“Now as I’ve gotten older, I’ve come to understand that, to take the next step, you guys [the media] are a big part of that,” Lawson said.

The large media turnout is one of the telltale signs surrounding the excitement around UK softball this season. After finishing 35-21 and being one win away from the Women’s College World Series last year, the Cats are looking ahead to the near and distant future.

“World Series is our goal,” UK catcher Jenny Schaper said on media day. “Our goal as a program is to take that next step to not only go this year, but to start going on a regular basis.”

UK will have faced half of last year’s WCWS field and played 16 games against eight different teams that advanced to last year’s NCAA Super Regionals by the end of the season. The senior core of Schaper, Katie Reed and Abbey Cheek will play a critical role in getting the Cats to the WCWS. That trio combined for 166 hits, 123 runs batted in, 30 home runs and a .331 combined batting average last season.

“I have all the confidence in the world in Katie and Abbey. We could not be more on the same page. I could not have asked for two better people to be with,” Schaper said.

The Cats also return other veterans– juniors Bailey Vick and Alex Martens were key pieces in an offense that outscored opponents 302-196. Vick had the highest batting average on the team last year with a .357, while Martens had the second most walks and RBIs on the team with 24 and 38, respectively.

“It helps that we have eight returners that know what it’s like to be in Super Regionals. I think it just brings a lot of confidence and it helps us help the 11 freshmen that we have to take them where we want them to be,” Cheek said.

Four of those 11 freshman are Kentuckians. Tekiya Garr-Carter, Jaci Babbs, Maclai Branson and Hannah Davis all hail from the Bluegrass. The four bring accolades to the table such as winning KHSAA state championships and being named KHSAA All-State.

Pitching aces Grace Baalman and Autumn Humes serve as another core component for the Cats. Baalman went 14-9 with 98 strikeouts and a 2.72 earned run average. Humes, a Division II transfer from Harding University last year, went 9-7 with 72 strikeouts and a 3.26 ERA.

“From an outsider coming in, I’ve realized that one of the things I’ve seen this group accomplish is the culture we’re setting. That can continue to be defined and develop more growth,” Humes said.