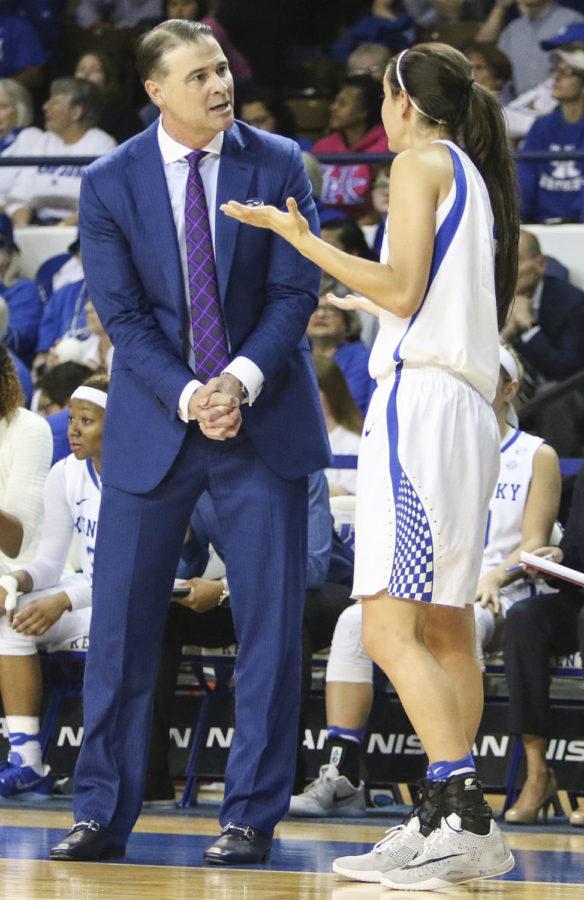 Kentucky women’s basketball has had talented and popular stars in its history, but after these players’ time wearing blue and white, where do they go?

For Maci Morris, her career may transition from the court to the coaching box.

Morris was recently invited to the WBCA’s prestigious, So You Wanna Be A Coach? program. This program, as women’s basketball head coach Matthew Mitchell said, is “quite an honor” to be invited to. Only 60 people nationwide receive invitations, and Morris was one of 36 Division I and three SEC players to be included.

This year’s So You Wanna Be A Coach? program will take place from April 3-5 in Tampa Bay, Florida, and speakers provided by WeCoach will teach the selected athletes during this three-day workshop.

The program has been running for 16 years, making it the longest-running education program in WBCA. WBCA executive director Danielle Donehew describes it as, “the entry point for women’s basketball players who want to coach.” Donehew cited the WBCA’s partnership with WeCoach as one of the reasons the program has had the success that it has had.

“Because of their participation in it, more than 400 former college women’s basketball players are currently working as coaches or in some role in our sport,” Donahew said.

Both Morris’s coaches and teammates believe that she has what it takes to have a successful career in coaching.

“I’ve been calling her Coach Morris for four years,” Mitchell said, “She’ll often stop me at practice, and she’ll start telling us what we need to do.”

“She would be a good coach. I’d probably be her assistant coach,” joked Taylor Murray, Morris’ teammate of four years.

Morris explained that her motivations for coaching came from outside of herself.

“My teams inspired me as well as my family and other people in my life and Coach (Lin) Dunn,” Morris said. “That connection should be very inspiring, obviously being with a Hall of Fame coach.”

Dunn, as Morris said, is a Hall of Fame coach who has the title of Special Assistant to the Head Coach with the Kentucky program. Dunn has over four decades of coaching experience at both the college and professional level, where she won a championship with the Indiana Fever in 2012. Dunn serves as one of Morris’s role models when it comes to coaching.

“She has her dad and people like Coach Dunn and Coach Mitchell, so she’ll be ready to coach,” said Murray.

Morris has coaching in her blood. Her father, Lewis Morris, is the boys head basketball coach at Middlesboro High School and coached at Morris’ hometown Bell County High School from 2007 to 2017.

Before she moves to coaching, Morris will have a chance to continue her legacy with the ranked Wildcats.

“I think she has a very bright future as a coach… Coach Morris will do fine,” Mitchell said.