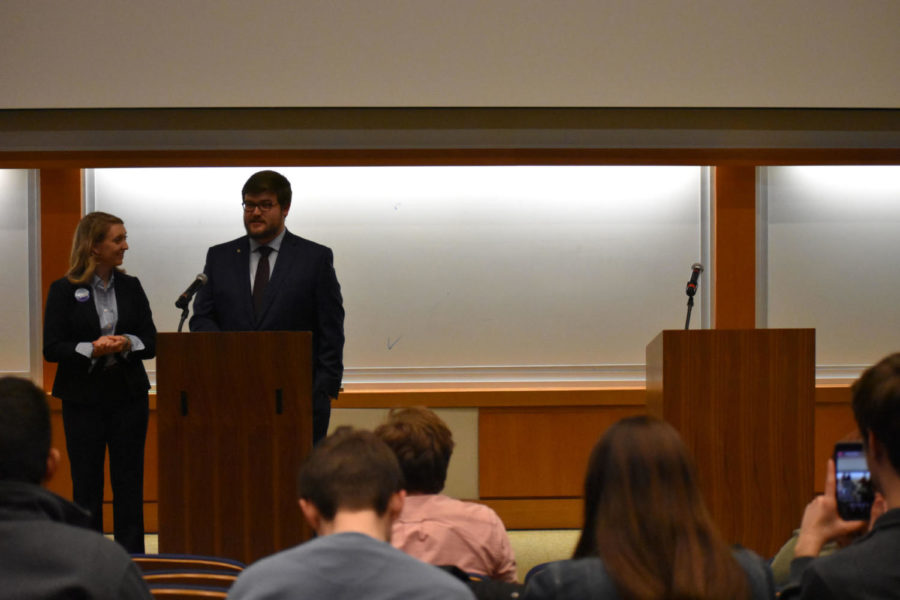 The event was attended by only one of the candidate duos: incumbent Michael Hamilton and running mate Kat Speece.

Challengers Tucker Lovett and Andy Flood opted out of the scheduled debate via a tweet, citing concerns of “lack of advertisement.”

“Wildcats, as you all know (or probably don’t),” the announcement reads, “tonight was supposed to be the Student Government Presidential and Vice-Presidential debate.”

“Through the entire election process the current administration has failed to adequately promote the election and the events surrounding it,” the announcement continues.

Lovett and Flood encouraged UK students to ask questions through social media, including on their campaign’s Instagram, “in lieu of the debate.”

The debate was moderated by Dean of Students Nicholas Kehrwald and organized around pre-submitted student questions.

Speece said they had formed this platform over the past year by meeting with students to gauge their concerns.

“Every group we’ve met with has expressed (mental health) as a concern,” Hamilton said. “As a team, we’ve talked through how student government can be a member of that conversation.”

Hamilton mentioned a new SGA position devoted to “mental health access and awareness” that was created last year during his tenure.

If elected, Hamilton said he would focus on further developing that position.

Hamilton said inclusion would be another initiative of his second term. He added that the slogan of his first campaign was “you belong here.”

Speece also addressed the importance of campus diversity to her.

“Michael and I absolutely believe that diversity should not be an afterthought,” Speece said. “It doesn’t take more than one look at us to realize that we don’t look like the rest of campus.”

Speece said their approach to encouraging diversity involved speaking with several concerned campus organizations, including the NAACP and the Black Student Union.

Hamilton said that he has prioritized diversity within SGA as president, but that there is “always work to be done.”

“We’ve made strides over the past few years to make student government a more inclusive organization,” Hamilton said. “We’ve broken down barriers that prohibit students from getting involved, and we’re really looking forward to seeing how we can keep being intentional about including different perspectives in our conversations.”

When asked about the differences between their campaign and their challengers’, Hamilton referenced “experience, passion and intentionality.”

“Kat and I are both very experienced in student government. We know how our process works, we know what the legislation says, we know how this organization works– and thrives,” Hamilton said. “We know what it needs. We know that it needs to improve. That’s why we’re running on a platform of progress.

“And we’re just two really passionate people,” Hamilton added. “You just won’t find anybody who cares as much about this organization, this university, as the two of us… and when you pair that with intentionality and the experience to get work done? Just sit back and watch us go.”

Along with their platform on diversity and mental health awareness, Hamilton and Speece said they would never vote for a student tuition increase.

Flood called the zones “one of the most outrageous examples of administrative overreach that (UK) offers.”

This was the only activity on Lovett and Flood’s social media as of two hours after the scheduled debate, although the candidates did request questions via their campaign’s Instagram story.

SGA Elections Board Chair Michaela Taylor said she was unaware of Lovett and Flood’s decision not to attend the debate until the tweet.

“It’s his (Lovett’s) choice,” Taylor said. “It was great to have this debate, though… I’m really glad that we had some people show up.”

After the debate, the Hamilton-Speece campaign released a statement that said they were “disappointed that our opponents chose not to participate in tonight’s debate.”

The statement continued to say that Lovett and Flood “disrespected the student body by failing to be transparent with where they stand on the multitude of issues facing campus.”

Students can vote in-person at the White Hall Classroom Building from 9 a.m. to 4 p.m. and the Gatton Student Center on Wednesday from 6 p.m. to 9 p.m., or online on BBNvolved at any time during the voting window.